On a day when the finely tuned hurlers of Limerick and Clare will take to the field in Semple Stadium, we decided to take look at simpler, less scientific time in sports science and nutrition.

Amongst the many luminaries that he wrote about was Dan Troy, a hurler of note with Claughaun around the time of Ireland’s push for independence. Dan played for Limerick in their All Ireland win over Wexford in the 1918 Final (which was played in Croke Park on the 26th January 1919) but in advance of that match he was issued with the following fitness and diet instructions from Jim D’alton the team trainer.

It is desirable to prepare for the fray with a light dose of Epsom salts before breakfast. As the ground is likely to be heavy constant practice of the muscles is necessary so that men will retain their hitting power to the end of the match.

For this purpose practice with the hurley is essential. Do not stop too long at exercise at any time or you would become mechanical and slow thereby losing. “whip” and spirited swift movement.

Do not mind the weather conditions because a cold can always be avoided by dressing in togs for exercise and rubbing over with towel and changing clothes immediately, putting your togs if necessary to dry for the next day.

There is no healthier time to exercise than a wild blustering day.” “Begin your work by hard walks every night and an odd short jog. Do not start sprinting until you feel that your system and sinews are toned up to work. 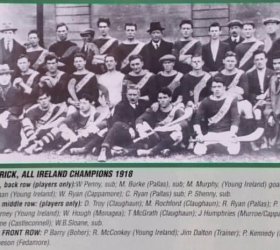 When sprinting start with a few loose runs at natural speed so as to get the blood flowing naturally through the nervous system and also to speed up the heart by degrees. By this system you strengthen the valvular system of the heart and do permanent good for yourself.

Do not overdo exercise it weakens the heart and such exercise does harm instead of good. Watch your weight and if you are carrying too much do not allow yourself to reduce quickly” he further goes on in assessing the Wexford team calling them “strong”.

The Limerick objective of being “strong and swift” would be attained he tells the players by “going to bed early and being up by 7.30am. In order to attain the prescribed 9 hours sleep they were to be “asleep by 10.30pm”. In obtaining this amount of rest the “sleep will rest the heart and distribute the juices of the body”

Smoking was “injurious” and he describes alcohol or fermented drinks simply as “poison”. “Fluid” he told his charges, “including water” should be limited as it keeps the liver “extended” and the “flesh full of moisture” and this in turn affects what is known as “The Wind”.

He tells the plyers that it is well “once or twice before breakfast while training to take “as much *Glauber salts as you would pile on a shilling”.

Before completely ditching this 99 year old advice completely it should be noted that Limerick beat Wexford in that final on a margin of 9-5 to 2-3 so maybe a revisit to Widdess’ or some such Apothecary to secure some “Glauber Salts” might be considered by John Kiely and his team before the upcoming championship opener against Clare. 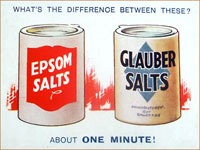 *For the record the Columbia dictionary describes Glauber Salts as “a common name for sodium sulfate decahydrate, Upon exposure to fairly dry air it effloresces. Glauber’s salt is water soluble, has a salty, bitter taste, and is sometimes used in medicine as a mild laxative”

So what is the science behind this rare all Ireland win for Limerick and is there any merit behind it. We decided it was time to talk to an expert. Step up Dr Catherine Norton, Lecturer in Sport and Exercise Nutrition at the University of Limerick.

The first part of the article that caught my attention was that Jim Dalton only allocated a fortnight to prepare! Compare this to the pre-season training that can begin as early as November for today’s hurlers.

I’d have concerns about the Epsom salts before breakfast and the Glauber salts on training days – even if it is only for a fortnight! Practices such as these are likely to have resulted in frequent stops on the bus to the game, as both have been used to treat constipation!!

We are all in agreement that smoking is still injurious, but where Jim seems to feel that smoking is only harmful in training, science and medicine now attest to the harmful effects of smoking for all. I don’t think you’ll find too may inter-county players who smoke.

Most squads now decide amongst themselves what their policies are on alcohol. It makes more sense for the players to agree as a unit that they will keep a handle on nights out rather than this being a condition for selection outlined by coaches and managers.

In inter-county set ups that I have been involved with the rules followed best are self-imposed and self-policed. Alcohol intake can certainly impair recovery from exercise, and at a high performance or professional level, alcohol is avoided.

Jim had strange advice on fluid intakes; limiting fluid intakes in advance of any event is likely to impact performance. This is the case even for weight category sports where fluid restrictions are common practice to make weight.

Current best practice would be that athletes aim to begin and end every training session or competitive event adequately hydrated. Dependent on environmental conditions, demands of the sport and individual athletes this challenge varies. In GAA context, particularly in the heat of a sunny summer’s day in Thurles, hydration is very important.

Most Inter-county teams will monitor hydration status on the approach to games, and I have heard of some county management teams ruling players out of selection if they fail consecutive hydration assessments.

Perhaps it is a reflection on the economic environment of the time rather than the disregard for nutrition, but Jim seems to underestimate the role that optimal diet and nutrition can play in support of training and performance. Sport and exercise nutrition is a relative newcomer to performance support but is emerging as an area where competitive advantages can be made.

The advice recommends sparing use of sugar. Sugar is a carbohydrate, and carbohydrates are the preferred fuel source for exercising muscles. Exercise frequency, intensity , time and type determine carbohydrate requirements where a triathlete will have greater requirements than a sprinter. Carbohydrates are required to support training and on game days there are very specific prescriptions for carbohydrate in the pre-match phase.

For clarity – salt is not a lubricant!

“Men of the Limerick team must depend on their own earnestness, persistence and determination to be fit for the fray”

Though many intercountry sessions are carried out collectively the above phrase still holds true. The best teams have developed a culture which is player-led, where sessions that can be carried out independent of the group such as recovery, mobility and strength and conditioning are undertaken by the players on an individual basis.

This independence is important as it allows flexibility for the modern day player on with family and professional responsibilities. Where this collective responsibility is not adopted by a team, it requires group training which puts unnecessary constraints on players which was likely a problem in Jim’s day too.

The above guide is also true for out of season conditioning. It is incumbent on the modern day player to report to squad training in condition to train, otherwise risk injury.

“Begin your work by hard walks…good for yourself”

Again, Jim Dalton provides some measured advice. Athletes must first train to build an aerobic base. This means starting at an appropriate intensity, which is unlikely hard walking for the modern day player! As the season progresses and fitness improves, it is possible, and important, to introduce high intensity sprint work.

A progressive warm up within sessions is also important, to achieve the appropriate range of motion of the joints and to allow the cardiovascular and respiratory systems assimilate to high intensity work by increasing depth and rate of breathing as well as heart rate. This facilitates the supply of oxygen to the working muscles and a reduction in oxygen debt at the beginning of high intensity exercise.

“Do not overdo exercise….too quickly”

Overtraining is a well-established cause of injury and it is important for players not to have acute spikes in their training load. Jim has astutely observed that rapid weight loss is a negative for performance, but perhaps didn’t understand the ‘why’. Rapid loss of weight is often targeted at reducing non-functional mass i.e. fat, but actually can often result in loss of muscle instead.

This is detrimental to the athlete’s ability to perform, therefore, a planned and staged training and dietary intervention drafted collaboratively by the team nutritionist and strength and conditioning coach is required for the modern day player. However, it is important to note that Jim was unlikely to have access to a backroom team of 20 or the research which informs these practices!