Limerick centre forward Aaron Gillane toyed with the Clare defence as Limerick booked their place in the Munster U21 Hurling Final following a comprehensive 1-28 to 1-13 point win over the Banner county.

A first half 8-point haul from Gillane coupled with five second half points helped Pat Donnelly’s men set up a crack at an eighth Munster title at the Gaelic Grounds. 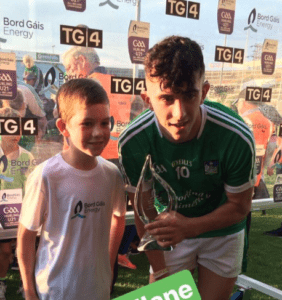 A sixth minute goal from Na Piarsaigh’s Peter Casey established 1-5 to 0-2 points lead and establish early control of the game.

Clare did respond with a Billy Connors goal but it did little to stem the tide as Gillane answered back with four points in as many minutes to send the home side into the break with a 9 point stranglehold on the game.

Tom Morrissey accounted for the first point of the second half when in fairness his effort should have raised a flag of a different colour. Limerick’s intensity then dropped off somewhat as Clare responded with five points on the trot to cut the deficit back to five points.

Limerick now led 1-15 to 1-10 and Clare’s surge seemed to spur them back into action with four unanswered points. Pallasgreen’s Colin Ryan then stepped up with another three points as Limerick moved 1-23 to 1-13 ahead with only 8 minutes left.

Late points from Cian Lynch, Paudie Ahern and Ronan Lynch pushed the lead back out to 15 points.

Clare Conor O’Halloran was given a second yellow in the last minute to relieve his marching orders when he pulled Barry Nash down. O’Halloran’s failure to deal with Nash was indicative of how the game went as a whole. The Banner simply could not deal with Limerick’s power and pace, couldn’t cope with their superior firepower.

It compounded Clare’s misery but mattered little. They were a beaten docket and Limerick were coasting. Pat Donnelly’s men will be back at the Gaelic Grounds on Wednesday July 26 for a final against Cork or Waterford.