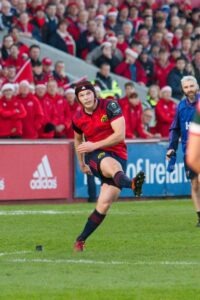 With the Six Nations finishing last weekend with Ireland getting one over their greatest rivals England and denying them a second consecutive Grand Slam, attention turns back to Munster and their quest for honours this season.

This weekend they travel to Italy to take on Zebre in the Pro12. Munster are currently third in the domestic table and seem destined for a play-off spot. Then next Saturday they entertain 4 time European Cup Champions Toulouse in the Champions Cup Quarter Finals.

With the likes of Simon Zebo, Conor Murray and CJ Stander among other returning from international duty, there is a real sense of belief in the Munster camp as they look to continue their impressive European form this season which saw them earn a home quarter final against the French team.

Munster will be favourites for the tie and should they prevail will face the winners of Saracens, who are defending champions and Glasgow, whom Munster have beaten twice already in the competition.

However, Munster will not look past next weekend in Thomand Park. Key to their hopes will be All-Black native Tyler Bleyendaahl who has been a revelation this season for the Men in Red. Although he arrived over two years ago in early 2015 his first two seasons with the province were highly disrupted by injuries. However, this season, Bleyendaal has remained fit and showcased his immense talent.

Arguably the greatest out-half in the history of Rugby Union, Dan Carter acknowledged Bleyendaal’s talent in a recent twitter Q&A. When asked would he consider playing with the Thomand Park outfit, Carter replied the following;

Not a bad compliment to get from a fellow Kiwi native and one of the best players of all time. Carter is not the only one who has recognised Bleyendaal’s blistering form as he was shortlisted for European player of the year alongside Munster teammates CJ Stander and Limerick’s Conor Murray.

Bleyendaal’s ability with ball in hand is second to none. He is an adept kicker from the tee and from his hands whilst also being able to spot to smallest of gaps in opposition defences as demonstrated by his try against Glasgow Warriors earlier on in the season.

Without doubt, Bleyendaal is a man on top of his game, and if Munster are to achieve silverware he will have a part to play in it, starting next weekend against Toulouse.

Munster are in the midst of a three-game winning streak in the URC since the turn of the ...
Read More →

There were a pair of vital wins for Limerick sides at either end of the Division 1A AIL ...
Read More →

Graham Rowntree's side picked up a third successive URC win since the turn of the year to move ...
Read More →