The Castletroy College student was an intrgral cog in the Rowing Ireland team that won the A Junior Gold Medal at the prestigious Coupe de la Jeunesse. The European Junior Rowing competition took place in Hazewinkel in Belgium over the past weekend.

The team was made up of Quinlan from Castleconnell BC also included Matt Dundon from Clonmel RC, Carlow RC’s Jack Keating and Cork BC’s Barry O’ Flynn.

Fresh off the success of the O’Donovan brothers at the 2016 Rio Olympics, it would prove to be another successful weekend for the Irish squad who would come away with a total of 5 gold medals at the event.

Well done to everyone involved, especially James. With the increasing success in the sport in the country, the Coupe will be staged in Ireland in 2018. 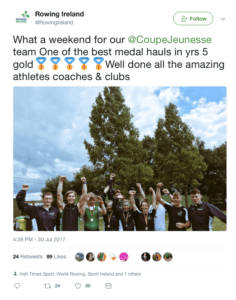