Munster have been drawn in Pool 4 for the 2017/2018 Champions Cup and will face familiar foes in Racing 92, Leicester Tigers and Castres.

It is pretty much a re-run of last year’s group bar the inclusion of Castres Olympique who finished 5th in the Top14.

The draw also throws up the possibility of Donnacha Ryan making a return to Thomond Park with his new club Racing 92.

Munster beat Leicester a home but lost narrowly at Welford Road while Rassie Erasmus’ team did the double over Racing 92.

Munster went on to lose out to eventual champions Saracens in the semi-final.

Check out the full draw here: 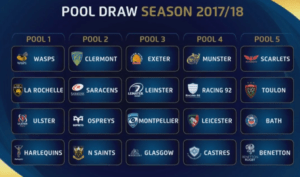