Weeks of speculation to end as Cheetahs & Southern Kings move North expected to be rubber-stamped in the next week.

South African media reports say a deal has been struck for the two South African teams to take part and that the expansion might not stop there with a wider expansion into North America in the coming years also on the cards as officials seek to tap into more countries to boost revenue.

Last week SA Rugby commentator and former Irish international and British & Irish Lion, John Robbie gave his seal of approval to the move. You can watch is reaction here.

The Cheetahs and Kings have been cut from the Southern Hemispheres Super Rugby club competition for 2018 which has reduced from 18 to 15 sides with Australia also set to cut on of their franchises.

The Pro 12 however is looking to go in the opposite direction and open up new markets. While there is no faulting their ambition, they would do well to take note of why Super Rugby is struggling. It’s struggling because it has been watered down and diluted, teams play sides that are from 6000 miles away so generating interest and rivalry has been an issue.

The long and difficult travel east and west across time zones to New Zealand, Australia, Japan and Argentina is extremely taxing on the players and plays havoc with keeping players in peak physical condition. It is also a major issue for broadcasters and TV schedules.

Currently the Pro12 features teams from Ireland, Wales, Scotland and Italy, but generates far less revenue that England’s Premiership and the French Top14. But can the Pro12’s problems be solved by the same expansionist concept that has blighted Super Rugby?

It remains to be seen. Adding the Cheetahs and Kings will bring income from South African Rugby and new broadcast markets, with local media reporting the deal is likely to generate an extra £6million per year.

With revenues currently sitting at £12million pounds per year, that is a significant boost for a competition which has been held in various guises since the first edition in 2001. 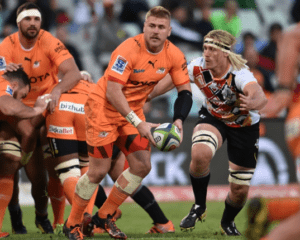 The Cheetahs and Kings in battle last season.

“The risk of doing nothing with the Pro 12 in the long term is the greater risk.”

Reports coming out of South Africa say SA Rugby chief executive Jurie Roux is in Dublin this week to conclude the deal that will see the Cheetahs and Kings join for the 2017/18 season, with reports that the competition will be split into two seven-team pools.

South African media reported on Tuesday that two more of the country’s Super Rugby franchises had expressed an interest in moving to the European competition when their contracts with the Southern Hemisphere version expire in 2020. However there has ben mixed reaction to the news amongst the SA Rugby media.

The long and difficult travel east and west across time zones to New Zealand, Australia, Japan and Argentina is taxing on the players and not good for television schedules, which has left the teams now looking north instead.