Both Goggin and Grobler have sustained early season ruling them out of the first half of Munster’s season.

Dan Goggin came on as a replacement against Benneton Treviso last Friday night before having to be stretchered off with what looked like quite a serious knee injury. After seeing a specialist in Dublin during the week, luckiliy the young centre does not require any surgery. He tore his posterior cruciate ligament and sprained his medial collateral ligament and will be out for between 4-5 months depending on how his rehabilitation goes.

Great news after seeing the specialist luckily avoiding going under the knife. Rehab and recovery plan underway hoping to be back asap. Suaf

New South African recruit, Gerbrandt Grobler, who signed from Racing Metro in the summer was very unlucky in his first game for the province when he injured his ankle in the latter stages of the pre season friendly against Worcester Warriors.

Unfortunately, Grobler was not as lucky as Goggin and underwent surgery during the week for his injury but it is not yet known how long he will be sidelined for. 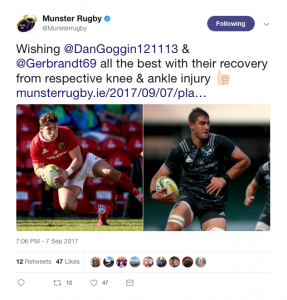