The amount of derby fixtures played by Irish provinces is set to be reduced to four per season.

As it looks increasingly likely that South Africa’s Free State Cheetahs and Southern Kings will be joining the Guinness Pro12 and creating a two conference system of seven teams, it means there will be a lot less Irish and Welsh derby’s throughout the season.

It is expected that each conference will not be allowed have more than two teams from the same country in it. The upshot of this would mean only four derby match’s for the Irish teams in the regular season compared other seasons where there would be a guaranteed six.

In the proposed conference system, teams in one conference will play each other home and away and then play games against teams in the other conference just once with the fixture rotating between home one season and away the next.

While there excitement in some circles about the introduction of these Super Rugby side’s as it brings a new dimension to the league, many Irish fans will be displeased at the fact they are not going to have six Irish derby matches like other seasons. 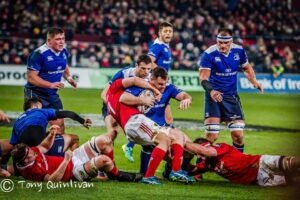 These matches are often the highlight of the season for fans with the age old rivalries taking centre stage especially around Christmas and the New Year with each province having one home and one away trip over the festive period.

Tournament organisers will argue that even though the provinces are going to miss two big derby games each season, that increased TV revenue brought by the addition of the South African teams will more than offset any potential loss.

While nothing has been confirmed, It is expected  that the “Pro14” will be discussed on Tuesday in a meeting with the heads of the Pro12 in a bid to formalise a competition structure agreeable to the teams.

The fact that no details of the upcoming season with regards to fixtures and dates would lend further credibility to this speculation. Wales online have reported that details of the new system have emerged.

The new system is to be based on the final standing in last year’s regular season with the conferences divided up accordingly.

If this is to be true then the conferences would be divided up as follows. Munster would be in a conference with Scarelets, Ulster, Blues, Edinburgh, Zebre, and one of the incoming South African Teams.

In the other conference, Leinster and Connacht will be with Ospreys, Glasgow, Treviso, Dragons and again one the the South African sides.

The fact that their are 7 teams in each conference could see the first placed teams directly through to semi finals with the 2nd and 3rd placed teams making the 1/4 finals.