The Limerick footballers finished their League Campaign on a high yesterday in Newcastle recording a 4th successive victory to conclude the League. Billy Lee must be wondering how the league would have went for the Treaty Men had to fixtures gone a different way. Indeed Limerick played the two promoted sides in the opening two rounds.

Lee will be immensely proud of his young charges in how they overcame a tough Wicklow side yesterday by 2-13 to 2-9. From a Limerick perspective, the game began disastrously, as Limerick trailed by 1-1 to no score inside the opening couple of minutes.

Yet by the 22nd minute, Limerick had clawed back their opponents to lead 1-4 to 1-3, with Danny Neville pointing his side ahead, after Seamus O’Carroll notched the Limerick goal.

However, Limerick suffered a sucker blow in the 31st minute as Wicklow scored their second goal of the game to regain the lead. The sides would exchange points before the break to leave the score 1-6 to 2-5 in favour of the Leinster men at half time.

The second half started slowly as both teams continued to be conservative in their play. However, the game opened up in the 56th minute as the brilliant Danny Neville pounced on a Wicklow mistake to score a vital Limerick goal. Neville and substitute Jamie Lee (x2) would further widen the gap for Limerick. By the 60th minute Limerick were ahead 2-10 to 2-7. 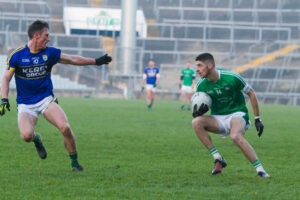 Danny Neville was in sensational form, scoring 1-5, with 1-4 coming from play

Wicklow rallied with a couple of points but Lee and Neville continued to reply for the hosts and Limerick would run out winners by 4 points in the end.

Limerick will now look to bring this impressive form into the Munster Championship opener in May.

Na Piarsaigh and Croagh Kilfinny brought the curtain down on the Limerick hurling championship on Sunday with the ...
Read More →

A Limerick college is yet to win the competition with UL reaching the final for the first time ...
Read More →

The Caherdavin outfit completed a county double this year, with triumphs in both the Limerick SHC and IHC. ...
Read More →

The City side were the only Limerick side to go the distance in their respective Munster hurling campaigns. ...
Read More →

The City side claimed a first Munster title on Sunday with a comprehensive win over the pre match ...
Read More →

The 2023 Fitzgibbon Cup kicks off in the new year with the University of Limerick the defending champions. ...
Read More →

After a six week wait, Na Piarsaigh's second side proved too strong for the West outfit to earn ...
Read More →