With Willie Boland getting his managerial career off to a flying start with a 2-0 win over St Pats, the interim coach looked to be the man to guide Limerick for the foreseeable future.

However, It is being reported today on Balls.ie that one former international manager has thrown his hat into the ring. It is believed that former Trinidad and Tobago coach Tom Saintfiet has put his name forward for not only the Limerick FC job but also the Sligo Rovers vacancy. 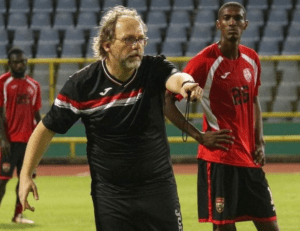 The Belgian who has managed a vast array of African and Asian nations as well as numerous clubs around the globe and is keen to return to European club football after beginning his management career in the Belgian lower divisions.

Saintfiet’s most successful period came as manager of Namibia. He took up the post in 2008 with the national team ranked 150th in the world. After numerous impressive performances, Saintfiet saw his charges rise up the world rankings, taking them as high as 116th in the world. However, he left this role in 2010 surrounded by controversy. Saintfiet cited a lack of training camps and insufficient support from the Namibian FA.

The Belgian would then go on to manage both the Ethiopian and Togan National teams before being shortlisted for the Nigerian managerial post in June of 2016. Nigeria as one of Africa’s footballing powerhouses would have been a massive role for Saintfiet but he was unsuccessful as Nigeria instead hired their caretaker manager.

Six months after the Nigerian disappointment, Saintfiet was chosen as manager of Trinidad and Tobago’s national team but resigned a month into his newest tenure. The 44 year-old now seems to determined to land a club job in Europe and has set his sights on Limerick and Sligo Rovers.

However, as far as Limerick are concerned, should Willie Boland continue to impressive for Limerick FC, he will be hopeful of obtaining the position on a full time basis. Boland is already an integral member of the club and knows the players inside out.

Limerick’s next two fixtures are both in the Markets Field against Drogheda and Galway United and represent very winnable games.

Boland will be keen to express the importance of these fixtures as Limerick now lie in 5th position. If the super-blues take the maximum from these games it will be difficult to look beyond Boland.