Ireland secured the Dalriada Cup with a deserved 22-17 victory over Scotland at Energia Park, on Friday evening.

Ireland won the first leg of this tie 39-17 and therefore had one hand on the Dalriada Cup prior to kick-off.

Gearoid Prendergast called upon nine Limerick based players in total, with seven in  starting fifteen, including captain Alan Kennedy. Clontarf out-half, Gearoid Lyons, who hails from Limerick, was unable to take his place on the bench, due to illness.

Dublin University flyer Colm Hogan opened the scoring with a  try in the 23rd minute, with Shannon’s Aarn Hehir involved late in the move. The visitors replied through Gregor Christie, and lead 7-5, thanks to a conversion from Aaron McColm.

Ireland were able to dominate the closing stages of the opening half, with a try from Michael Melia giving them a 12-7 lead at the break. Melia touched down after a well-executed five meter lineout.

Shannon’s Pa Ryan found himself in the sin bin early in the second half, for a blatant offside. Scotland reduced the deficit as Aaron McColm slotted the resultant penalty to make it 12-10.

Despite this, Ireland dominated the possession and lived inside the Scotland 22. Scotland were reduced to 14 men entering the final quarter of the game, and a series of penalties ended with Taylor adding a penalty.

Substitute Sam Coughlan-Murray got onto the end of a kick to get a third Irish try, on 65 minutes. Scotland finished the stronger and were within a score thanks to a 75th minute try from Rhys Davies.

Despite a nervous final few minutes, Ireland held to retain the silverware they won 12 months ago. 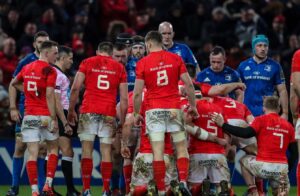