Ireland have secured their place in next year’s HSBC World Rugby Sevens Series qualifying tournament in Hong Kong, and have taken another step closer to qualification for next summer’s Rugby World Cup Sevens in San Francisco.

Anthony Eddies men saw off Russia 17-14 in Sunday’s final in Clermont, claiming their second Rugby Europe Grand Prix prize, adding to the title they won in Moscow in June.

The win sees them top of the Rugby Europe Grand Prix Series standings on 56 points. 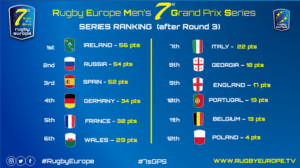 The Irish breezed through the pool stages seeing off Belgium, Italy and Wales.

Munster and Shannon RFC man Greg O’Shea featured for Ireland, and scored a fine try in a 35-0 victory over Italy.

Their showing in the pool, helped to set up a quarter final with hosts France, a game that they just shaded on a 7-5 scoreline, despite some bizarre refereeing in the closing stages.

FT: Ireland 7-5 France. Despite some time-keeping controversy at the end, Ireland are into the semi-final at the #Clermont7s. #IreM7s pic.twitter.com/NlUHPLCrnk

While they ran out 17-5 winners over Spain in the semi final stages.

FT: Ireland 17-5 Spain. Another fine performance from the @IrishRugby lads. They face Russia in the #Clermont7s final at around 4.10pm. pic.twitter.com/Z5jdxJ9lvD

Ireland now have plenty to play for when they compete in their final Rugby Europe Grand Prix tournament in two weeks time in Exeter.

They need to finish in the top two places in the Grand Prix Series stages in order to qualify for the World Cup in San Fransisco.
[/et_pb_text]
[/et_pb_column]
[/et_pb_row]
[/et_pb_section]