Limerick to take on Cork in their next round of the Championship:

It’s a repeat of this year’s Munster Final as Limerick take on Cork in round 2 of the Liberty Camogie Championship on Saturday in Pairc Ui Rinn at 2.30pm.

Limerick were unlucky to lose out to Offaly by a single point on a 2-18 to 3-14 scoreline in what was a pulsating opening game. 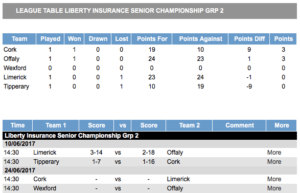 Limerick were missing 9 players on the day due to the leaving cert and other reasons but they will be back this weekend. The return of Fiona Hickey, Marian Quaid, Caoimhe Lyons and several others is good news for the Limerick selectors.

Sporting Limerick spoke with John Tuohy prior to the game. You can listen to the interview in full below.

Cork are going into the game looking for another victory in their campaign after a good win over rivals Tipperary two weeks ago by 1-16 to 1-7 in what was a comprehensive victory. It was serious statement of intent from Cork who cancelled out a pretty useful Tipperary forward line.

John Tuohy’s have played Cork 6 times over the past 18 months, winning three and losing three. Following on from their Munster final defeat at the hands of Limerick, Tuohy is expecting a response from Cork.

“I am sure the will come out all guns blazing, they are championship specialists and are very hard to beat. I am sure they will have a plan for us.

“What I want from my girls is that we go out there and give it our 100% best and go for it as best we can.

“Cork are very experience and will be very hard to beat. We are under no illusions going down there.”

Limerick had some good spells in the Offaly game but drifted in and out of the game for long periods, allowing the faithful county to always stay that few points ahead of them.
Concentration will be paramount on Saturday and Tuohy knows that his team will have to be focused for the entire duration.

“Concentration is key, we didn’t kick on against Offaly and we were second to the ball, Offaly had a game plan that worked, the won all the breaking ball, the were very good and were very good at coming forward, tacking on five or six points in a row.

“We certainly can’t afford to do that against Cork, if we let Cork ahead of you, a goal or two goals, they are very have to beat. We have to take the game to them. We will have to be at 100% to have any chance of beating Cork as they are a very good championship side.”

A win for Limerick on Saturday would be a huge result but regardless of the outcome Limerick know that the can still qualify with wins over Tipperary and Wexford in their remaining two games.

That is a scenario that Tuohy would rather avoid as it gives very little room for error in the last tow rounds. Limerick come into the game under more pressure that Cork who already have a win under their belts but know that they have the talent and capability to beat their provincial rivals.

Let’s hope Limerick get their Championshipback on track with a win tomorrow.

Best of luck to all involved.