JP McManus has spoken for the first time about his “dream” of bringing the prestigious Ryder Cup golf tournament to Adare, Co Limerick.

Mr McManus hopes to beat competition from across Europe to host the biennial golf match between elite players from Europe and the United States and to bring the event to Adare Manor and Golf Resort, Co Limerick.

Mr McManus arrived today at Adare Manor by helicopter, to announce the creation of 300 jobs ahead of a major revamp of the five star resort.

The businessman, praised the 670 constitution workers on site for keeping the massive project on schedule to reopen next September.

“I didn’t put a lot of work into it, but a lot of people have. They are anxious to meet the deadlines which should be later in the year,” Mr McManus said. 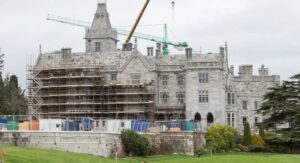 Construction work at the Adare venue

“For me, Adare is a very, very special place, and I’m delighted we were in a position that we could do something about it, and it’s got great support from everybody in the county and we’ve got a lot of encouragement.”

“I just hope everybody’s expectations will be met,” added Mr McManus, whose eldest son, John, was one of those working on site as part of the massive construction project today.

Mr McManus opened up for the first time about his dream to host the Ryder Cup at Adare in 2026.

“The Ryder cup is a very very big ask, and like every other golf club in Ireland, we’d be delighted to host the Ryder Cup, but it’s one of (my) long term dreams,” he said.

“The soonest possible time (to host it) would be 2026, if you’re ever going to get it. But, there’s an awful lot of tough competition from within Europe and Britain, and I’m sure, from the rest of Ireland.”

What was already one of the best parkland courses in Ireland has received a huge facelift that will undoubtedly take it to the next level in terms of venues.

The old course as it was posed a serious challenge to golfers of all levels so we can only imagine what the new course will be like.

Couple that with the fact that we have already proved ourselves capable of hosting the event. Who will forget the 2006 success at the K-Club in Kildare.

Ryder Cup venues are currently confirmed all the way up to 2024 hence 2026 will be the next opportunity for Adare to launch a bid.

2018 sees the tournament go to Le Golf National outside Paris before heading across the pond to Whistling Straits and a serious tough examination over a links course.

Then it goes to Italy for the first time to Marco Simone G & CC on the outskirts of Rome before retiring back to upstate New York and Bethpage Black in 2024.

Tournament organisers have come in for criticism for not sharing the European host venues across a broader selection of countries. Indeed up until the Paris venue in 2018, no country outside the UK, Ireland and Spain had hosted the European leg of the competition.

With France and Italy getting the next two European selections, organisers could be set for a return to this neck of the woods.

And we would only be too delighted to have them. The 2014 edition hosted at Gleneagles in Scotland netted a handsome £106 Million for the local economy and attracted more than 63,000 visitors to the area over the week.

The knock on effects for local business, tourism and sports is not to be underestimated and would be of huge economic benefit to Limerick and the Mid West.

The successful running of the McManus Pro Am and the Irish Open is further proof it needed that the venue is capable of hosting major events.

We at Sporting Limerick think that Ryder Cup 2026 at Adare has a nice ring to it!

Posted in Golf, Other Sports