Munster Rugby can confirm that Ian Keatley has completed his time with the province, joining Declan Kidney’s London Irish for the remainder of the season.
The news comes after the recent announcement that Keatley will join Benetton Rugby at the end of the season.

The 31-year-old out-half joined Munster ahead of the 2011/12 campaign and has been an integral member of the squad over the past eight years playing a pivotal role in Munster’s successes.

Having scored 1,247 points in his 180 Munster appearances, Keatley is second on the list of Munster’s all-time top points scorers, and joint-second in the current squad for appearances made in red.

Capped seven times by Ireland, Keatley is third on the list of all-time top points scorers in Guinness PRO14 (1,428 points) and fifth on the list of most games played (196 matches).

Commenting on his departure, Ian Keatley said: “I just want to say a big thank you to everyone for their support and messages since announcing my move to Treviso, it has been overwhelming hearing from you all.

“I want to say thanks for all the support me and my family have received over the years, I know my parents and family will miss coming down here.

“I’m never going to forget the terrific support I got on days in Irish Independent Park and Thomond Park, especially those big European occasions in Limerick which are really special days, and I have fantastic memories for life.

“I’ve experienced great highs and some low lows over my career, with the highs far outweighing the lows, but the support following Axel’s passing is what sums up Munster for me.  It’s for that I’m really going to miss this place, it has been special, and it has been true.

“I know I’m from Dublin, but I’ve lived here for the last eight years, and with my fiancée Lisa and daughter Beth born here, I know we will be back again.  I’m from Munster and I’m a Limerick man now, and it holds a special place in my heart.

“I’ve this opportunity now to go and get some game time before the end of the season and I’m excited about going out playing rugby again.

“Thanks again for your support throughout the years.” 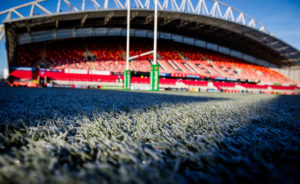 Munster Rugby confirmed this afternoon an academy player from their "wider training squad" tested positive for COVID-19. The ...
Read More →

Nine players have joined the Munster senior squad this summer and they have caught up with each new ...
Read More →

The Munster squad have started week three of their second four-week bloc of training ahead of this month’s ...
Read More →

The IRFU have confirmed zero positive cases from Munster after the second round of PCR testing this week. ...
Read More →
We use cookies to ensure that we give you the best experience on our website. If you continue to use this site we will assume that you are happy with it.Ok