Limerick FC back to winning ways

Limerick FC are back to winning ways after successful St Pat’s trip.

Limerick FC got back to winning ways last night with a solid 2-0 victory away to St Patrick’s Athletic thanks to goals from Tony Whitehead and John O’Flynn.

POST-MATCH REACTION: We got the views of Willie John Boland following the 0-2 victory at Richmond Park last night.

In the club’s first outing since parting with Martin Russell earlier in the week and saw a much improved defensive performance under the guidance of interim boss Willie Boland.

Following a less than impressive start to the season, Pat’s came into the game high in confidence following a 4-0 away win over Bohemians last weekend. In contrast, Limerick FC suffered a 3-0 home defeat in the Munster derby with high flying Cork City.

After a pretty uneventful opening it was the away side that hit the front courtesy of a Shane Duggan free kick which got the slightest of touches from the outstretched boot of Tony Whitehead to steer the ball past Conor O’Malley.

Indeed the Pat’s keeper might feel he could have done better with the initial delivery but the deftest of touches was enough to deceive the keeper.

Liam Buckley would have demanded a response from his charges at the break and he got just that with the Inchicore side coming close on a few occasions.

Firstly, Conan Byrne found himself on the end of a well-weighted Ian Bermingham cross at the back post which was steered just wide.

Then, midfielder Alex O’Hanlon found a pocket of space inside the box before threading a neat pass to Kurtis Byrne.

Byrne’s goal bound effort forced a fine save from Brendan Clarke who had been superb all evening.

Alarms bells were ringing for Boland and Co as Pat’s kept creating chances but some resolute defending kept them at bay.

The big turning point came when Pat’s were awarded a penalty for a handball against Limerick’s Robbie Williams. Up stepped Conan Byrne to dispatch the spot kick but Clarke had other ideas.

The former St Pat’s number one dived to his right to make the save and maintain Limerick’s one goal lead.

Limerick then took control of the game when a long throw released winger Chiedozie Ogbene down the touchline before a superb delivery found John O’Flynn just inside the box. 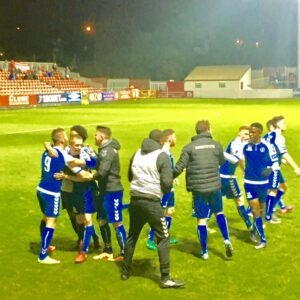 O’Flynn had his mind made up early and his first time side footed effort found the back of the net past O’Malley’s despairing dive.

The Limerick bench and travelling supporters rejoiced after what can only be described as a difficult week for the club following the Cork defeat.

Limerick saw out the final seven minutes plus injury time to maintain a clean sheet and move up to 5th in the table.