Limerick Ladies lose out to Louth in Division 4 league clash

The Limerick Ladies Senior Football team lost out to Louth in the Division Four semi-finals of the LIDL National Ladies Football League after a four-point loss on Monday afternoon.

The game which was played in O’Dwyer’s GFC in Balbriggan opened well for the Limerick women after a point from Mairead Kavanagh in the eighth minute.

The first goal of the match came after the break for Louth when Emma McArdle fired low into the corner of the net to give her side a three point lead before the break.

Limerick playing with the breeze in the first half struggled to get more scores and went in at half time three points down.

Limerick then went down to 14 players when defender Niamh Ryan was sent to the sin-bin in the second half.

Catriona Davis got things rolling again for Limerick with some fine scores from play but a goal early on in the second half from Louth’s Rebecca Carr sent her team on their way to victory.

Limerick had most of the possession in the remaining 20 minutes but only managed to get two points from Davis through frees. The game finished 2-5 to 0-7.

It was not Limerick’s day but John Ryan knows there is still an awful lot more in this side. Limerick’s final two league games are at home to Derry next Sunday and  Fermanagh the following Sunday.

Winless Derry should provide Limerick with three points and depending on how other results go, a win in the last round against Fermanagh should be enough to qualify Limerick for the top 4 and a semi final berth. 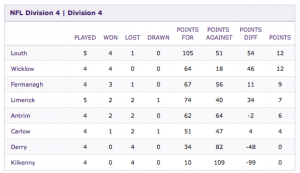