Cathal O’Neill who was Limerick’s standout player last time out against Tipp started the scoring for Limerick in the opening minute with a well taken long range free. The teams then exchanged a couple of scores with the sides level on three points a piece after 15 minutes. Limerick then stretched ahead 0-6 to 0-3 before Cork reduced the deficit to a single point in the 19th minute courtesy of Jack Cahalane who would finish the half with 0-4.

Limerick would score five points on the trot prior to half time to extend their lead, with three long range scores coming from Colin Coughlan, Eoin O’Mahony and Cathal O’Neill. At half time Limerick held a commanding 0-12 to 0-7 lead.

Jack Cahalane opened the second half scoring for Cork with a point from a free before a brace of O’Neill points for Limerick pushed them further ahead. Cahalane would add on another couple of frees to give the Cork side hope. However, their momentum was short lived when limerick produced a sparkling goal. Patrick Kirby and Diarmuid Hegarty linked up in midfield before releasing Cormac Power who slotted past the Cork keeper.

O’Neill and Hegarty (2) would extend the limerick lead to ten points by the 47th minute. Cork rallied with the next four scores before O’Neill eased the Limerick nerves with a fantastic point by the sideline in the 60th minute. Limerick now face Waterford next week in the Gaelic Grounds where a win will see them through to a Munster final. 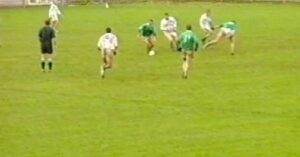 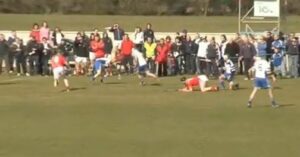