Limerick dominated Clare with a 9-13 to 0-6 win over their neighbours in Mallow last Saturday to claim the under 14C Munster Final. 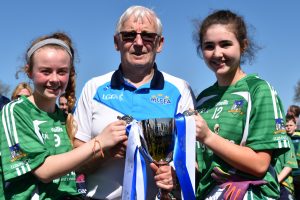 When the sides met earlier in the season, Limerick came out on top but were expecting a tougher battle on this occasion with a title up for decision.

With conditions under foot in great condition and the sun shining, the scene was set for was set for some flowing football.

It was the ladies wearing green that had the better start. In fact it was an opening ten minute blitz that saw Limerick register four goals that laid for foundations for what would eventually become a comfortable victory.

Limerick were dominating throughout the field and were superior in all departments while the player of the match was awarded to top scorer on the day Ella O’Connor (St Senans). 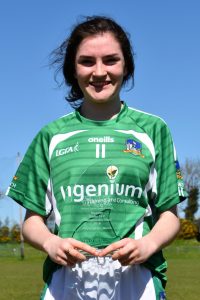 The Cup was presented to Limerick’s joint-captains Rachael Donnellan and Kaylin O’Connor to tremendous cheers from the Limerick supporters.

The team and management went on to thank all the parents and supporters who came to support the team the final and throughout the season. At the post match celebratory function, various awards were given to the team.

The players player of the year was awarded to Ele Madigan (Ahane) and the Management player of the season to Katie Buckley (Dromin/Athlacca/Bangoue). These awards were kindly sponsored by Agata Graphics.