Former Limerick FC and Pike Rovers player Declan Casey spoke to Sporting Limerick over the weekend and chose the best 11 players he has played with during a lengthy career.

Declan opted to go with a full junior selection despite his spell in the Eircom League from 1997-1999 as he had played many years with Pike Rovers.

Declan also speaks about his time with Limerick FC and as assistant manager along with Declan Conisidine with Pike Rovers.

To listen to the full interview, click on the link below. 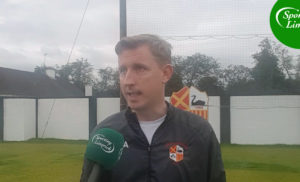