Making a case for a Munster Trio

Is it time for one of Munster’s new backline heroes to be called up to Joe Schmidts Ireland squad?

Tommy Bowe’s inclusion in the Irish match day 23 for the crunch match against the Welsh came in for a lot of criticism from the public, with many arguing that Bowe’s recent injury woes, compounded with the form of some young players warranted a different selection as a replacement back in the squad.

These critics were somewhat justified when only two minutes into his cameo against the Welsh, Bowe had to be stretchered off with an ankle injury, which was later confirmed to be a fracture. This does not take away from the fact that Bowe is one of Ireland’s greatest ever wingers, second in all-time try scoring list behind Brian O’Driscoll. However,’ his best years are behind him and it is time for some young players to be blooded.

Yet once Bowe’s injury was confirmed, Fergus McFadden was named as his replacement. Another who has had his fair share of injuries and has come in for much criticism during his career. McFadden has always been a favourite of Schmidt, yet he does not possess the qualities of a top class international winger. Lacking in speed and creativity, this decision will baffle some.

In Munster alone there are 3 young men that could make a case for being included on the Irish team. They are in no particular order Ronan O’Mahony, Andrew Conway and Darren Sweetnam. These three have excelled for their province this year and can count themselves extremely unlucky not to have been called up to the Irish squad in Bowe’s absence.

Conway has been a revelation this year for Munster. Whether it be on the wing or at full-back, Conway has really stood up this year as one of Munster’s most exciting players after a few years on the fringes. Equally adept in either position, Conway is quick footed and able to break the game line. He is also a very strong player in the tackle, something which Joe Schmidt is particularly keen on. 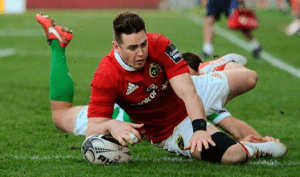 Ronan O’Mahony dots down for Munster

Conway’s impressive form was rewarded prior to the Scottish game as he was in the initial Irish squad for the opening two games.

O’Mahony is Munster’s joint leading try scorer this season along with Jaco Taute with 8 tries for the province. Mahony is a strong winger with an explosive turn of pace. He has been outstanding this season for the men in red in both the Pro12 and European Champions cup. Even with the wealth of backs at their disposal, O’Mahony has proved himself to be invaluable.

Then you have Darren Sweetnam. The former Cork hurler has proved to be sensational for the Munster men this season. If it were not for an injury in November, Sweetnam may well have been selected for the Irish team in the Six Nations. With great aerial ability and elusiveness with ball in hand, the Cork native has caused untold damage for opposition defences this season. Prior to his injury, some were touting Sweetnam as a potential Lion this summer, which highlights his immense talent. 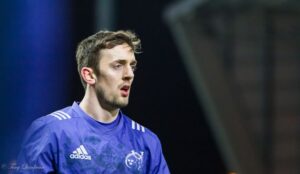 Darren Sweetnam has been in fine form

Whilst these three will be frustrated to be overlooked by Schmidt this Spring, it is clear he has chosen McFadden as he is well acquainted with the drills they will be using this week prior to such an important game against the English.
However, with a host of Irish players set to tour with the British and Irish Lions to New Zealand this summer, expect these three Munster men to feature prominently for the Irish team in their own tour this summer.