Limerick Celtics had a mixed weekend with a win and a loss while UL Huskies beat Meteors.

LIT Celtics finished their weekend fixtures with a win against the Gamefootage.net Titans from Galway and a loss to Cork’s Ballincollig.

The home side started the brighter and had 12 points on the board through Hehir and Tommy Walsh and kept this dominance up until the end when they finished 14 points ahead.

The second quarter continued in the same vein as the first with St. Amour, Cian O’Reilly and Emmett Brown notching up some really nice scores and left the Celtics 52-32 up at half time.

The Limerick side dominated proceedings again in the third and final quarter with Conor Byrne, Aidan Holden, John Bridges and Dylan O’Dwyer all getting on the scoresheet to make it a comfortable evening for the 9th place side.

On Sunday night, LIT Celtics made the trip to Cork to take on second place Ballincollig in the Mens Division 1 League.

It was a different story for the Celtic’s in Cork with the home side dominating large periods of the game and finishing 95-83 winners in the end.

Again, Matt St. Amour impressed for the away side scoring 39, whilst Tommy Walsh with 20 and Cian O’Reilly with 10 were the best performers on the night for the Limerick outfit. 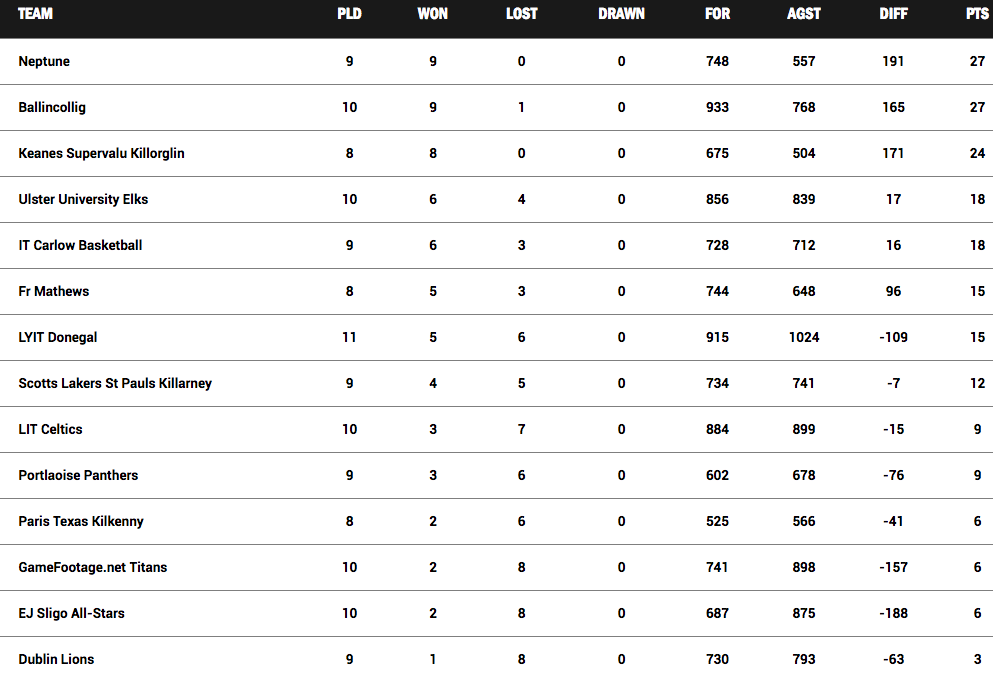 The UL Huskies women’s basketball team defeated the Meteors on Saturday evening in the Women’s division 1 league. The Meteors ran into an early 25-14 lead in the first quarter but the Huskies persevered in the second and cut that lead to just a point come half time.

After a tight third quarter which saw both side making some nice baskets, the Huskies finished with a one point lead going into the final 10 minutes.

After a quiet start to the fourth, the home side were a point behind with six minutes gone, but strong defence and offence saw the Huskies race into a 10 point lead with just 2 minutes left on the clock.

The away side did manage two big 3’s towards the end but the UL outfit held on to record their third win in five.

Top scorers on the night included Rachel Sheehan with 36, and Orlaith Woods and Abby Jefferey with 10 each.