Johann van Graan’s side returned Pro14 action with a comprehensive 68-3 win over a pretty poor Kings side at Musgrave Park on Friday night to get their challenge for top spot in conference B back on track.

The early exchanges were pretty unremarkable until the 7th minute when a searing John Hodnett took the ball to within a metre of the Kings line. With a try looking likely from the recycle, Kings fullback Andell Loubser cynically killed the ball and was yellow carded.

Munster decided on a scrum dead in front of the posts and when Arno Botha powered off the back of the set piece, the Kings defence was not up to standard as the number 8 crashed over. Hanrahan added the extras to make it 7-0 after 9 minutes.

A knock on from Mike Haley was pounced on by the Kings who retained the ball well and forced a defensive penalty from the home side. Demetri Catrakillis slotted the kick to make it a 7-3 game.

Another Munster break punched deep into the Kings 22 but an unsympathetic pass was knocked on by Mike Haley and the chance went a begging.

Munster applied pressure at the scrum and forced a penalty which Hanrahan kicked to touch 5 metres from the Kings line. With the lineout secured Munster used the full with of the pitch moving left only for Dan Goggin to change direction and come back to the near side.

A slick pass from Mike Haley put Calvin Nash in space to round his man and dot down. Hanrahan made it 14-3 with the conversion.

The clock read 23 minutes and the home side were well on the way to the bonus point. Five minutes later and they would add a third try after another sweeping back move. This time, a Neil Cronin pass found Arno Botha on a superb line to pierce the Kings defence and gallop over from just outside the 22.

It was Botha’s second try of the match as Hanrahan added his 3rd conversion of the night to make it 21-3.

It looked as if Munster would have to wait intel the second half to grab the BP try but it came after clever lineout throw on the half way line. Dolphin clubmates Scannell and Cronin linked up well to set Munster off deep into the 22.

A clever kick over the top from Hanrahan found Jack O’Donoghue on the wing. The bounce fell perfect for the Waterford man to cross for Munster’s 4th try. Hanrahan added the conversion to make it 28-3 at there break and bonus point in the bag.

Munster showed no signs of letting off and a superb kick return from Mike Haley powered up to the 22 where he found Neil Cronin on his inside shoulder who in turn found Josh Hodnett. The powerful back row had a clear run at the line and crossed for the fifth try of the night. Hanrahan made it 35-3 with the extras on 51 minutes.

A defensive brain fart from the Kings winger allowed Shane Daly in for Munster’s 7th which was converted by replacement Ben Healy to bring the score to 49-3.

The 8th try arrived on 73 minutes from Dan Goggin to make it 54-3 before Arno Botha capped of a sweeping attacking move for his hat trick try. Healy slotted the extras to push Munster out to 61-3. Shane Daly grabbed the 10th try of the night with Healy again adding the extras to make it 68-3.

All in all it was a really poor Kings effort but you can’t take anything away from the home side. The win sees them leapfrog the Scarlets and Edinburgh to top spot in the conference at least until those two meet tomorrow afternoon. 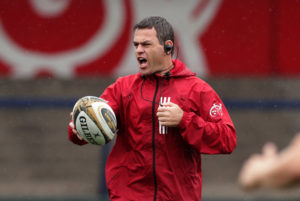