Three first half tries accompanied by four in the second half simply left the western province with no answers as Munster’s power and pace was too much for Connacht to contain. 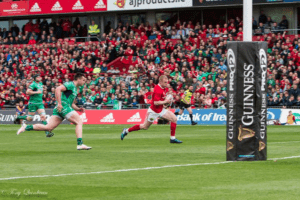 In what was sometimes a mistake-ridden and frenetic affair, Keath Earls, Jack O’Donoghue and Andrew Conway scored a try apiece in the first half, with Conway adding a second after the break, with Conor Oliver, James Cronin and Francis Saili completing the rout.

Connacht tried to hit back before the quarter hour mark, but Munster turned the ball over following a clever crossfield kick and the home side cleared their lines.

Munster extended their lead ten minutes later when Connacht were penalised at the breakdown and Keatley kicked the penalty to give his side a ten-point advantage.

A second try soon followed as Jack O’Donoghue finished off a fine move involving Cronin and Conway running the ball back into danger after Connacht thought they had cleared – Keatley again converting.

And two soon became three just after the half hour mark as Conway juggled a Keatley pass to finally get control and produced a fine finish to cross in the right corner. The imperious Keatley converted once again.

The home side’s domination continued apace early in the second half, with Alex Wootton jinking though the Connacht defence, before being brought to the ground and the recycled ball finding Cronin, who drove over from close range – Keatley staying perfect from the tee.

That try secured the Munster bonus point and gave the home side a 31-0 lead with 35 minutes still to play at Thomond Park.

Connacht did not roll over, though, and they hit back with half an hour to play as Kian Kelleher expertly caught a high cross-field kick from Jack Carty to touch down – Craig Ronaldson converting well from the right sideline.

Conor Murray was then introduced – to huge applause from the homes crowd – for his first Guinness PRO12 action since the Six Nations, and made an immediate impact as his quick ball led to full-back Conway skipping over for his second of the game, again converted by Keatley.

Connacht kept going, though, and got on the board again as Naulia Dawai powered over from the back of a rolling maul with a little more than 15 minutes to play – Ronaldson again converting to reduce their deficit to 24 points.

Munster continued to press and replacement Saili picked up a loose ball in the Connacht 22 – following big defensive pressure from Dan Goggin who forced a mistake – to touch down in the 69th minute and give Keatley a simple conversion for a 45-15 lead.

While the 50-point barrier was broken with an Oliver try in the right corner as the clock ticked into the red, with Keatley unable to maintain his 100 per cent kicking record as he was off target from the right touchline.

But it made no difference as Munster ensured it would be Ospreys they faced in the play-offs, rather than the last side to beat them in the Guinness PRO12, Scarlets.

Munster were simply outstanding today and their gameplan was simply to play at breakneck pace in both attack and defence.

Erasmus seemed to take the shackles off and the players responded. Despite several front line personnel being rested, players like Goggin, Oliver and O’Donoghue were excellent.

The South African has a problem that any head coach would love heading into the Ospreys semi final in two weeks time.

A squad full of players hitting form at just the right time and some of the younger Munster players giving him a selection head ache.

Connor Murray also came through his appearance unscathed and looked better for the run out. All in all Munster are in very good stead for two weeks time.