No CJ Stander or Conor Murray as Rassie Erasmus names his side to take on Ulster on Saturday.

Included in the starting line-up are Donnacha Ryan and Tyler Bleyendaal having completed their return to play protocols this week.

The front row contains Dave Kilcoyne, Niall Scannell and John Ryan, while Donnacha Ryan links up with Billy Holland in the second row.

The back row sees two changes with only Jack O’Donoghue retained at number eight. Captain Peter O’Mahony and Tommy O’Donnell return to the flanks.

Half backs are Duncan Williams and Tyler Bleyendaal who have combined well in recent weeks.

Keith Earls, Rory Scannell and Simon Zebo are introduced to the backline with Earls on the left wing, Scannell inside Francis Saili, and Zebo at fullback.

Ian Keatley is named in the replacements after rehabbing a knee ligament injury sustained against Cardiff Blues at the start of March.

James Cronin is also named after overcoming a bang to his knee in last weekend’s encounter against Glasgow Warriors.

Roll on Saturday and let’s hope Stander and Murray are just being rested as a precaution. 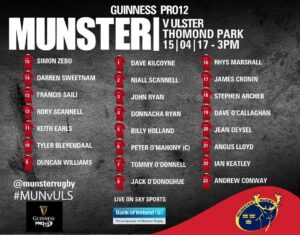