Munster’s Peter O’Mahony will captain the British & Irish Lions in the first test against New Zealand.

2017 has been quite the year for Peter O’Mahony. The year began for the Cork man with him still nursing himself back to health after a torn ACL suffered at the 2015 RWC.

O’Mahony returned to the Irish side in March to put in a tour de force performance against England to prevent a Grand Slam for Eddie Jones’ men.

The Corkman has been a force of nature for Munster this season past and his inclusion in the Lions tour initially raised some eyebrows. His ability in the lineout coupled with his overall workrate, quality and leadership are second to none and he has been one of the stand out performers on the tour.

Munster’s Conor Murray is selected at scrum half while Leinster’s Tadhg Furlong and Sean O’Brien also make the starting fifteen. Jack McGrath and Jonathan Sexton are amongst the replacements.

The Lions team in full is: 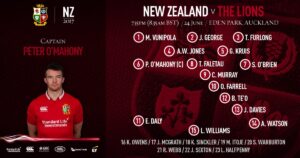 You can see the selection announcement below. Video credit British & Irish Lions Youtube.

New Zealand named their team earlier this evening and it goes without saying that it is a really strong side.