The pair, who qualify under the three-year residency rule, were pictured at an extended training session at Carton House yesterday as they look to force their way into Joe Schmidt’s Test plans. 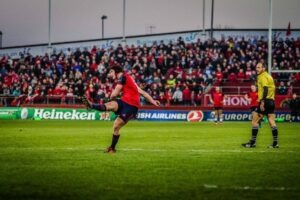 Bleyendaal is a New Zealand U20 international and captained his country to victory in the 2010 Junior World Championship. Despite the early part of his Munster career being blighted by injury, he was an instrumental part in Munster’s marked improvement last season. He will not be able to play part in the November series as he does not become eligible until January 2018.

The former Canterbury player was named Munster’s Player of the Year for 2016, secured a European nomination and was picked in the Pro12 Dream Team.

Aki was born in Auckland and also qualifies for Samoa. Unlike Bleyendaal, Aki will be n October ahead of the November internationals against South Africa, Fiji and Argentina.

The Connacht centre’s desire to play for Ireland has been called into question as earlier this year as he admitted the harboured international ambitions but refused to to declare for Ireland despite having met with Joe Schmidt.

Ireland and the provinces have benefited significantly from the residency rule with Munster backrower CJ Stander and Ulster’s Jared Payne becoming stalwarts of Schmidt’s squad.

World Rugby made the decision earlier this year to extend the residency period for eligibility from 3 to 5 years with the ruling to come into effect from 2020. It will not have and bearing on foreign players currently with Irish teams or anyone who joins up until the rule change is implemented.