Nineteen year old Autumn Collins recently represented Ireland at the European U23 Track Cycling Championships in Portugal. Competing in the Sprint events, She became the first Irish woman to make it through to the qualifying match sprints series when she recorded a time a 12.3 secs for the 200m tt, averaging just over 58kph.

Autumn lost out in the match sprints to the German Cyclist Pauline Grabosch, who went on to claim the silver. In the Keirin event Autumn finished in 13th position. Returning to Ireland for the National Championships, the Newcastlewest native teamed up Manchester based Belfast cyclist Robyn Stewart for the team sprint.

On a wet and windy day in Dublin, not even the weather could stop the duo from smashing the Irish record for the 1 lap event as they went on to win Gold beating their nearest challengers by over two seconds. Autumn now holds both the Senior and Junior Team Sprint records having set the Junior record with Amy Good two years ago when the pair won senior bronze as Juniors. In the Kierin which followed after the team sprint, both riders came through their qualifying heats and semi finals undefeated. 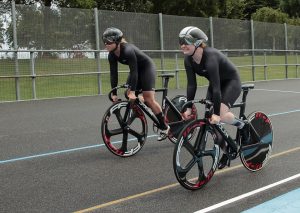 Autumn Collins leads off Robyn Stewart as they head to Gold at the National Championships.

In the final, after the pacing motorbike pulled off, Autumn attacked with 300m to go, before Robyn drew level and then pulled clear to win from Autumn with Fiona Guihen in third spot. The pair will contest the National Elite Sprint Championship later this month in Dublin.

After the National Championships, Autumn will head to Belarussia where she will train under the guidance of eight time World Champion and Olympic Medalist Natallia Tsylinskaya for three weeks before returning to University in Maynooth. Over the course of the winter Autumn will compete in a number of sprint meets in UK and Europe.