No room for error as Limerick Camogie take on Tipperary

Nothing but a win will for for John Tuohy’s side agains Tipperary this afternoon as Limerick chase their first All Ireland championship win of 2017.

With two losses in their Championship campaign so far, only wins against Tipp and Wexford will do if they are to retain any hope of a quarter final. Even at that, scoring difference will also play a role with Limerick’s heavy loss to Cork last weekend doing further damage to their cause. 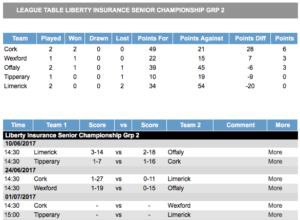 During the week, Sporting Limerick spoke to Matt O’Callaghan on where Limerick stand.

“It’s mostly disappointing, its very hard to put a finger on whats happened in the short space of a month’.

‘It gives them an absolute mountain to climb, they have two games left, they go to the rag on Saturday to play Tipperary and they follow that up with their final game which is at home against Wexford. When you look at they way Wexford over turned Offaly yesterday who beat Limerick, that is going to be a huge challenge.

“John Tuohy has flagged this from the outset, that this has been the group of death and it certainly has, Cork were All Ireland Finalists last year, Wexford were Semi-finalists, Offaly and Tipperary were Quarter-finalists so it was a very difficult group.

“Had we won against Offaly maybe you would have seen a different Limerick team in Pairc Ui Rinn, it may not have been enough to win the match.

“Next weekend is a huge game in the rag, you beat Tipperary and Wexford and you are still not guaranteed a Quarter Final space, but Limerick will certainly want to go out on a high, its going to be very very difficult.”

One thing is for sure, if Limerick play to their potential, they can get the season back on track with a win, if not then a season that promised so much following their maiden Munster Championship title, will have fallen flat.

Best of luck to Limerick today.

The second round of the 3Dental senior, intermediate, junior A and junior B championships take place across the ...
Read More →