O’Mahony: ‘Lions can go all the way’

O’Mahony confident that Lions can succeed in New Zealand.

Munster and Ireland’s Peter O’Mahony says that the Lions can 100 percent defeat New Zealand this summer. 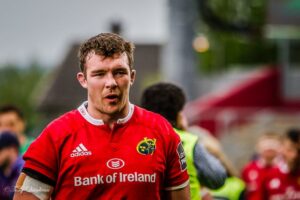 O’Mahony has been superb for Munster this season

Speaking at the Lions media day in London on Monday, O’Mahony said that he is confident that the Lions will be able to pull off an upset win but that it was imperative that the players selected are able to gel on tour.

When asked if the Lions could beat the All Blacks “Yeah absolutely,” O’Mahony told 3News reporter and Sunday Independent columnist Sinéad Kissane.

“You look at the squad that has been picked and it’s a talented and competitive group of people. I have no doubt we’re going to push ourselves as hard as we can.

“You just have to try and stay as positive as you can, but at the end of the day, it’s about a group of people being as tight as possible in a short enough space of time to try and go do something special.”

The Cork man will now tour with the Lions for the first time this summer and revealed that he has sought the advice of current and former teammates before departing with the squad later this month.

“I have spoken to a lot of guys who have toured before and all their advice comes back to is just to immerse yourself in the Lions culture, and just be as you would be when you are with your club or your international team,” added O’Mahony.

“There’s a reason why we’re picked and don’t and get away from that and try and be something that you’re not.

“Do what you’re good at, and do what you’ve been picked for, and if everyone does that to the best of your ability, you’re in with a good shout.”

When asked about Munster resent Champions Cup Semi-Final loss to Saracens, Munster Director of Rugby Rassie Erasmus said in a recent interview that…

“You learn a lot against a team like Saracens because that’s a pressurised game and if you lose that specific game you are out of the mix,” Erasmus said after the Connacht game.

“A league game like this where you have already qualified, the pressure is off. You don’t know what is going on in the other camp. The coach is leaving, it’s your last game. There are a lot of emotions. Sometimes that pushes you, sometimes it pulls you down a little bit. It’s difficult to read a lot into today’s game. I’m glad for the guys who are not regular starters.

“So sometimes you can look very one-dimensional against Saracens but that’s not a result of your planning, it’s a result of their effective pressure they put on you.

“It’s very realistic to say that when that game was finished ‘Oh, this is what it’s about. That’s why teams struggle so much against them. That’s what they do really well.’

“So we are trying to take a lot from that, trying to apply that in games going forward. I’m not saying in any way that we are going to be successful doing that in the semi-final but we certainly learned a lot from playing Saracens, little things that sometimes don’t catch the eye, even by coaches doing analysis during the week, which you see on a Monday, post-game during the review where you think ‘the things they do there are just extra special’.

“We just accept that they were better than us, let’s move on, we’re playing in the Pro12 now.”

Article courtesy of the Irish Independent.