The City side have already went one better than their previous Munster championship in 2016 where they lost in the semi-final.

Monaleen will travel to Pairc Ui Rinn this weekend as they take on Tipperary side Roscrea in the Munster AIB GAA Hurling Intermediate Championship with the game throwing in at 1pm on Sunday.

Both teams head into Sunday’s decider with relatively narrow Munster semi-final victories under their belt. Monaleen were 2-13 to 0-16 victors over Clare side St. Joseph’s Doora Barefield while Roscrea edged past Cork’s Inniscarra with the score ending 1-17 to 3-9.

Mark O’Dwyer’s performance in the semi-final was vital for the Limerick PIHC winners, as he hit 1-6 against the Clare opposition with Donnacha O’Dalaigh also finding the back of the net that game to book their place in the final.

Elsewhere, it was Luke Cashin that ran the show for Roscrea as he scored 1-8 for the Tipperary side who became the first Tipperary side in nine years to reach the Munster Intermediate title.

Roscrea have enjoyed a slightly longer Munster campaign than their Limerick opposition as they had to overcome Ballysaggart in a quarter-final before their semi-final two weekends ago.

But both shared similar paths to the Munster final provincially as they had to bounce back from 2021 relegations to reach their Premier Intermediate finals. Monaleen only suffered defeat once on their PIHC journey which occurred in their second round but responded in kind with four successive wins to take the title they last won in 2016

Path to the Munster Final

Roscrea were crowned Tipperary PIHC champions when they defeated Gortnahoe-Glengoole in their county final at the end of October, with the score ending 1-17 to 0-16. They were favourites from the start of the campaign to return to the Senior ranks of Tipperary this following their relegation 2021.

And the Tipperary outfit are also favourites to claim the Munster title on Sunday. They are priced at 4/11 while Monaleen are the underdogs at 5/2 to bring the Intermediate Munster title to Limerick.

Sunday’s affair will be the first time the title goes to either Tipperary or Limerick in ten years, with Silvermines and Effin back-to-back winners in 2011 and 2012.

But will the drought end for Limerick or will it end for Tipperary? It will come down to Sunday’s clash in what’s set to be tight provincial final between Monaleen and Roscrea.

Pa Ranahan | It’s a free swing in these early games, why not swing for the fences!

Pa Ranahan | It’s a free swing in these early games, why not swing for the fences!

“Be careful what you wish for.” Those were the words of former manager Billy Lee in an interview ...
Read More →

Limerick will end a fifteen year wait to play in the top two tiers of National League football ...
Read More →

Brian Ryan’s side are the defending champions and are seeking a third title since 2018. UL booked a ...
Read More →

Limerick were beaten by Cork in the McGrath Cup final last Friday night ahead of their return to ...
Read More →

The game is a repeat of last year's final where the Galway side were crowned champions for the ...
Read More →

The reigning champions can book their quarter-final berth with a win in Castletroy this evening. Limerick colleges UL ...
Read More →

There was late drama in Limerick as Mary I’s chances of reaching the knockout stage were slashed. DCU ...
Read More → 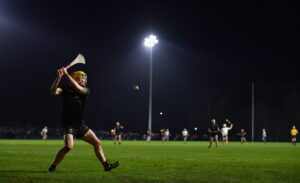 The defending champions got off to the perfect start last week with a comfortable away victory in ATU ...
Read More →