PREVIEW: Round two of the Limerick SHC offers up some tantalising fixtures

The  newly structured senior county championship kicked off last week with results as expected in Group 1. Wins for Na Piarsaigh, Patrickswell and Kilmallock see them in the driving seat for a place in the knockout stages. The round 1 results means that it will be winners against losers in all of the Group 1 fixtures this weekend. Meanwhile the new structure paid dividends in Group 2 where it was a much tighter affair, with Monaleen, Ahane and South Liberties scraping through their clashes, leaving us with some tantalising fixtures to look forward to this weekend.

The structure of the championship has changed for 2018 with two groups of six split between group 1 and 2. The top two in Group 1 will qualify directly for the semi-finals, with third and fourth advancing to the quarter final. The top two in Group 2 also qualify for the quarter finals. The side who finishes top of Group 2 will also earn promotion to Group 1 for the following year with the bottom side in 1 relegated to Group 2.

The sides in each group are as follows: 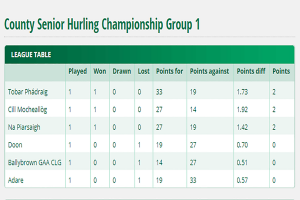 Reigning champions Na Piarsaigh will be hoping for their second win of the championship when they clash with Ballybrown on Saturday. The Caherdavin side showed no ill-effects of their All-Ireland Final defeat to Cuala last weekend when they eased past Doon on at scoreline of 1-16 to 4-15, Conor Boylan, Shane Dowling, Ronan Lynch and Adrian Breen with the goals. Meanwhile Ballybrown suffered a heavy, 13 point defeat to Kilmallock last Saturday, Alan O’Connor scoring 0-12 of their 14 points from placed balls. Ballybrown supporters will be hoping they can rediscover their competitive streak that saw them to the county final in 2016 and the quarter-finals last year, however, it’s likely that the All-Ireland club finalists will have too much in the tank for Ballybrown when they meet in Bruff.

Patrickswell went into their opening round game with Adare as slight favourites but emerged as clear victors from the one-sided affair, with the final score 3-10 to 3-24. Adare’s three goals came in the closing stages which may be the only worry from the game for Patrickswell manager, Gary Kirby. However they will face a much tougher task when they take on Doon at the weekend, a side who know they have much more to offer than was shown in their opening round defeat to Na Piarsaigh. Darragh O’Donovan scored their only goal from a free last weekend and they finished that game on a scoreline of 0-16 to 4-15. They have the potential to push Patrickswell all the way, but the latter will again go into the clash as slight favourites.

Adare will have much to prove on Sunday following that crushing defeat to Patrickswell but they face a team who are just as formidable in Kilmallock. Adare manager, Ger O’Loughlin will be well aware of the threat posed by Kilmallock having guided the team to the All Ireland club final in 2015. John Brudair’s side had the easier of the opening round fixtures, having eased past Ballybrown last weekend. While these two sides have always thrown up interesting clashes between them, Kilmallock are deserved favourites based on the opening round results. 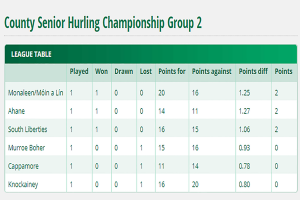 Although this fixture sees winners v losers from Round 1, it will be far from an open and shut case. Cappamore led in the closing stages of their game against Ahane and were very close to causing an upset only for a late surge from Colm Hanly’s men, ending the game on a scoreline of 014 to 0-11. Meanwhile Monaleen were pushed to the very end by Knockainey but produced just enough to get them over the line, winning on a scoreline of 0-20 to 16 points. While this is expected to be a very close clash, Monaleen are gifted the favourites title with the momentum of a first round win.

Before the start of the championship, Ahane were named as favourites to top Group 2 but a things were far from easy for them in their opening round fixture against Cappamore. A late surge from Ahane, through Tom Morrissey and Johnny Fox, saw them outscore their opponents by five points to nothing in the closing stages, earning them the victory. Meanwhile just a puck of a ball separated newly-promoted, Murroe-Boher  and South Liberties with the former losing out by a point on a scoreline of 1-12 to 1-13. This match has all the signs of being the most intriguing clash of the round. This is a very tough game to call, but Ahane might just have the edge over Murroe-Boher.

Knockainey are a troublesome side for any team who come up against them, as they showed in their opening round defeat to Monaleen however they may struggle without key player, Patrick Kirby who is recovering from an injury. It was a far from convincing win for South-Liberties against Murroe Boher in the first round, snatching the three points with a one score victory and they will be hoping to prove that it was a deserved win with a better performance this time around. Again, this has the potential to be a very close encounter but you would expect South Liberties to make it two wins from two in the championship.