Reeling in the Year: Limerick GAA’s 2001

Our Reeling in the Years of Limerick GAA continues today as we travel back to 2001 and the first year of the qualifier system.

Limerick began their League campaign with back-to-back wins over Antrim and Offaly.

Galway would defeat the Treaty in Round 3 but a win over Dublin in their next game got them back on track.

However, defeat to Clare in their penultimate game saw them out of knockout contention before their finished the group with a win over Meath.

Limerick gott heir first Munster championship win since ’97 as they beat Cork 1-16 to 1-15 in the quarter-finals in Pairc Ui Chaoimh.

In the semi-finals they faced Waterford in the same venue.

The Deise started on fire and held a 2-16 to 0-1 lead within the opening quarter of an hour.

However, Ollie Moran got Limerick’s first goal shortly after to bring life to the Limerick cause.

In the end, Limerick’s goals would prove the difference as they turned their eleven point deficit into a 4-11 to 2-14 win.

That win would see Limerick into a first provincial decider since 1997 where they would met Tipp as they did four years previously.

Limerick did put the eventual All-Ireland champions to the pit of their collar but the Premier would run out 2-16 to 1-17 winners in Pairc Ui Chaoimh.

In the All-Ireland quarter-final, Limerick were paired with Wexford who were beaten by Kilkenny in the Leinster final.

Barry Foley would get a pair of first half-goals which were cancelled out by three green flags for Wexford who held a slender lead at the half.

Limerick slowly began to turn the tide in the second half and eventually found the lead with just over five minutes remaining.

Wexford replied to level but points from Paul O’Grady and Brian Begley looked to have sealed Limerick’s passage to the final four.

However, there was time for late drama as Wexford goalkeeper Damien Fitzhenry notched his second goal with time running out to snatch the victory and eliminate Limerick in a classic contest.

Limerick’s U21 counterparts fared out better however, as they retained their U21 All-Ireland Hurling Championship.

In Munster, they accounted for Waterford in the semi’s before a one-point victory over Tipp in the final.

In the All-Ireland semi-final, they proved too strong for Galway whcih set up a clash with Wexford in the final.

Avenging the defeat their senior contemporaries suffered, they won out 0-17 to 2-10 against the yellowbellies.

There were encouraging signs in the National Football League for Liam Kearns’s side in Division 2A.

However, promotion was still a couple of years off for the Treaty.

Limerick received a bye into the semi-finals of the provincial championship where they were pitted against Kerry.

In Fitzgerald stadium, the Kingdom would prove too strong but again there were signs of progress as Limerick eventually fell to a 1-15 to 0-10 defeat.

However, in the first year of the qualifiers, Limerick were given a second chance as they played Westmeath in the second round of the All-Ireland qualifiers.

Adare made the breakthrough in the SHC, winning their first ever title at the grade at the expense of defending champions Patrickswell.

After losing their first five county deciders, the west club finally won out, winning 2-17 to 2-8 in the Gaelic Grounds.

Crecora won out the Junior B Championship.

Dromcollogher also achieved their maiden Senior success as they avenged the defeat in the final 12 months previous to take home their first ever SFC crown.

They proved far too strong for Mungret St Pauls in the decider winning out 1-14 to 0-5.

It was their fourth consecutive county final after winning Junior in 98, Intermediate in 99 and losing the Senior final in 2000.

Monagea were crowned Junior A champions while Ballysteen took the Junior B honours. 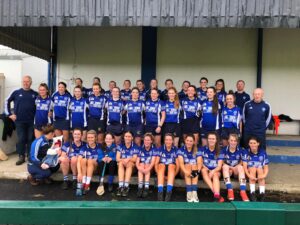