There was a near-full round of games played this weekend, as the poor weather gave pitches and teams a chance this week. For the first time all season, there was five Premier Division games played on the one weekend, with four of the five games won by the side with home advantage. Indeed, there was only two wins for away sides all weekend.

Meanwhile, silverware was won by Dromore United A and Ballysteen in tightly fought finals on Friday and Saturday.

Weekly Observer Division 1 League Cup Final
Athea United 1-2 Dromore United
Dromore United sealed their first silverware as a new club, ignoring the underdog tag to defeat Athea United. Athea opened the scoring through Darren Murphy. Their lead lasted little time as Ryan Kelly hauled the Kildimo-Pallaskenry outfit level. The sides were deadlocked at the short whistle. Athea would miss a penalty in a period of dominance and were left to rue this late one.

Eoin Mulvihill, in the final quarter hour, netted at the back post, to seal a wonderful night for the side currently mid-table in Division One. Captain Barry Walsh was also selected as Man of The Match on the evening.

The men in green retain their Divisional Cup crown, getting one over on their near neighbours. They had to rely on the dreaded spot kicks. Man-of-the-Match was Paul O’Shaughnessy and he found himself on the scoresheet. Darragh Ranahan netted the other Ballysteen goal.
Kevin Madden had cancelled out the opener before Dromore again trailed. A late leveller came via Gary Sheahan, to force the extra 20 minutes. O’Shaughnessy together with Mark Ranahan, Tomas Sheahan and Jamie Dolan all converted in the shootout to stop Dromore United winning two cups in just 24 hours.

Weekly Observer Premier Division
Ballingarry AFC 1-0 Creeves Celtic
A first half strike from midfielder Mark Carmody was enough for Ballingarry to get back to winning ways against Creeves Celtic. The home side, have been in overall decent form and quickly forgot the 5-3 away loss to Glin Rovers last weekend. Played under lights, they were somewhat comfortable against a Creeves side looking to add to their recent draw with Breska Rovers

Kilcornan 1-1 Granagh United
It was honours even in Kilcornan as the home side held the advantage for a brief period. Ken O’Donoghue fired them ahead but within 10 minutes, Granagh were level with Dan Shelton on target. It is a first point of a challenging season for United. It is a fourth draw in five games for Kilcornan who would have targeted this for their first win of the league season. They’ll have to aim for that, away to Ballingarry next Friday.

Broadford United 2-0 Rathkeale
Following their exit from the Munster Junior Cup last weekend, Rathkeale were to suffer their maiden league reverse of the season. With that, Broadford, who were playing just their third game, sealed their first win of a fragmented season. Jim Neenan’s side took the lead on 31 minutes through Derry McCarthy. The visitors had the chances with Gary Enright and Thomas Qulligan going close, the latter hitting a free-kick off the bar just after the hour mark. The spoils were sealed when Michael Brosnan dispatched a late penalty. These were the first goals that Rathkeale have conceded after a near flawless five games – winning all to nil.

Newcastle West Town 4-0 Breska Rovers
Newcastle West Town turned in arguably their best performance of the season, when swatting aside Breska Rovers. Jamie Keane opened the scoring before Shane Stack made it 2-0 inside the opening quarter hour. Stack and Keane would add another goal each in the second half as Breska Rovers finished with 10 men. The result makes the mid-table congested, as Newcastle West move onto five points – their first win – while Breska stay above them, on seven points.

Abbeyfeale United 2-0 Glin Rovers
It was two wins in as many outings for Abbeyfeale United, who have now climbed to within one of their rivals Glin Rovers. It is a third loss of the season for Rovers. Tommy Smith’s penalty just before the half hour opened the scoring. Billy Quirke had denied Paul Sheahan from a penalty after just five minutes at the other end. Rory O’Brien sealed the win with a strike 20 minutes from time.

Weekly Observer Division 1
Shannonside FC 4-0 Shountrade
Shannonside were another side who won at home, they had a routine triumph over struggling Shountrade. Efforts from Fernando Samedo, a brace from Martin Fitzgerald and a David McDaid strike was more than enough to claim another three points. The Foynes-Shanagolden outfit let 2-0 at the interval.

Rathkeale B 4-2 Newcastle West Reserves
These two towns clashed in Holycross, with Rathkeale claiming the win. Keith Hartnett and Michael Mulcahy were on the scoresheet in the opening half, with Mark Hogan and Paudie Mulcaire adding the extras in a goal filled contest. Rathkeale now move clear of Shountrade and push Newcastle West down into second from bottom.

Askeaton AFC 4-1 St. Itas
With Athea not in action, St. Ita’s had the chance to close the gap, but with Askeaton taking this win, St. Ita’s are now probably out of the running for the title. Athea, are nine clear of Shannonside who move into second. Matt Moane netted a hat-trick, his headed making it 1-1 after Ita’s led. Pete Harty put them ahead at the interval. Moane then scored a free-kick before another strike from distance made it a memorable afternoon for the young attacker.

Weekly Observer Division 2
Mountcollins AFC 1-3 Knockaderry AFC
Winless Mountcollins fell at home to Knockaderry. The two-gaol margin is the same as it was (3-1) when these sides clashed in the reverse fixture in October. Evan Lacey was on target for the hosts.

Glantine 0-5 Ballingarry B
Goals are something Ballingarry B know all about and they netted five in swatting aside Glantine. David Hanlon, Noel Geary, Alan Cronin and a Jamie Ryan brace helped them go six clear at the top of the second tier – albeit with an extra game played more than Glin Rovers B.

Glin Rovers B – Abbeyfeale United B – Postponed
No referee available for this clash of the B’s in Glin.

Carrig Celtic 3-4 Breska Rovers B
Goals from David Hall, Barry O’Connor (2) and Evan McGregor helped Breska Rovers B to an away win. Their keeper, Freddie Lynch, was again, in top form between the goals. 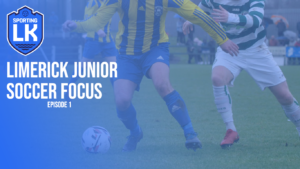 Wins for Rathkeale, Broadford and Breska Rovers in Desmond League

The jersey isn't available to buy as of yet with Treaty United kicking off their season in just ...
Read More →

The draw for the last 16 of the Munster Junior Cup took place this afternoon and threw up ...
Read More →

There are three Limerick sides remaining in the hunt for the Munster Junior cup including defending champions Fairview ...
Read More →

Wins for Rathkeale, Broadford and Breska Rovers in Desmond League

Once again, home advantage appeared to be important across the four tiers of the Limerick Desmond League. There ...
Read More →