Munster full-back Mike Haley was one of the player’s put in front of the press this week ahead of the province’s Champions Cup opener away to Ospreys on Saturday.

The former Sale Sharks utility back has settled into Munster nicely and has brought an extra layer to the backline. Haley’s performance’s didn’t go unnoticed at an international level, Joe Schmidt gave the 25-year-old his first cap against Italy in one of Ireland’s Rugby World Cup warm-up games back in August, something he reflects on with happiness:

Unfortunately for Haley, he was among the players cut from the squad ahead of the tournament itself.

But just six rounds into the Guinness Pro 14 he has played some great Rugby, which included picking up a Man of the Match medal against Ospreys last month.

A recent addition to the Munster setup has been former Wallabies out-half Stephen Larkham as Senior coach. The 1999 Rugby World Cup winner has settled into Limerick since August, and is already making an impact on the likes of Haley and a number of his peers:

“I’ve been enjoying my Rugby recently and he’s aided that.”

If Haley can continue to be the potent attacking weapon for Munster that he’s capable of, he’s bound to get his name in the mix for a second cap come February, when Andy Farrell takes over the reins as Ireland Head Coach ahead of the 2020 Six Nations Championship.

Check of the full chat below! 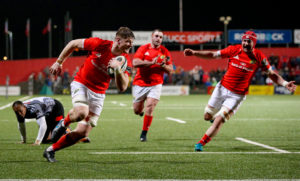