With the World Cup on the horizon, the chance to impress Joe Schmidt and book a seat on the plane to Japan for the competition is quickly running out for plenty of Irish players.

For Limerick native Sean Cronin, exclusion from the squad is unthinkable with the hooker, arguably the best back up in World Rugby.

Having toured in 2011 and 2015, Cronin says the current squad is the most competitive that he has been a part of.

“It’s a competitive environment. I don’t think there’s many World Cup squads at the moment with their 31 solidified, so lads are trying to put their best foot forward with the coaches and try to get on the plane.”

“This is probably the most competitive squad I’ve been in.”

Although he is plying his trade with Leinster, Cronin has not forgotten his roots, paying particular attention to the current batch of Limerick hurlers who are reigning All-Ireland champions.

Having witnessed final losses in 1996 and 2007, Cronin was delighted to see John Kiely’s side recapture the Liam MacCarthy title for the first time since 1973 last August.

“We’ve waited long enough. I was at the ’96 final when I was young enough, that wasn’t a great day and 2007. So, it was unbelievable, I was really chuffed!”

Watch the full interview and more with the Irish squad on our Facebook page below. 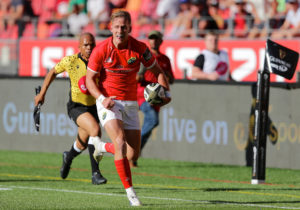 British and Irish Lions have confirmed their tour of South Africa in 2021 will go ahead as planned. ...
Read More →

Money talks, bullshit walks. When it comes to rugby union post-Coronavirus, I think that idiom will become money ...
Read More →

The Irish Rugby Football Union (IRFU) have released their plans for the 2020/21 club season. In a statement ...
Read More →

World Cup winner RG Snyman has given his first interview since joining Munster earlier this summer. The second-row ...
Read More →

JOEY CARBERY has played 17 times for Munster since his acrimonious move south in the summer of 2018. ...
Read More →
We use cookies to ensure that we give you the best experience on our website. If you continue to use this site we will assume that you are happy with it.Ok