What Do Level 5 Restrictions Mean For Football?

With Monday’s announcement that Ireland would be entering Level 5 in the “Living with Covid Plan, as of midnight on Wednesday,” there are a number of changes to football activity in the country.

Due to the introduction of Level 3 a fortnight ago, all amateur and schoolboy teams were allowed to participate in non-contact training in pods of 15. Also, no amateur matches were permitted to take place. However, during Level 5, all adult amateur football activity including training will cease as of tonight for a period of 6 weeks.

Players from the age of 19 and under will still be permitted to train in pods of 15 but it will remain as a non-contact session and matches will not be allowed to take place. Effectively, underage football remains in a Level 3 scenario.

Similarly to the GAA, elite athletes can continue to train and play matches behind closed doors. For example, the Airtricity League and Women’s National Leagues will be allowed to continue as normal without supporters attending games.

Treaty United will be pleased with the news as they have just two league games remaining in the season and also an FAI Cup Semi-Final against Cork in early November.

Below is the statement from the FAI Twitter page tonight: 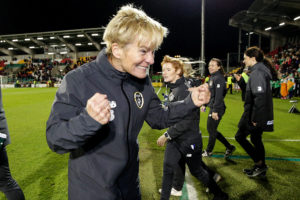