The duo were called up by manager Stephen Kenny along with Millwall striker Troy Parrott and Peterborough midfielder Jack Taylor.

The Ireland manager was forced into yet more squad changes as both Matt Doherty and James McLean, who have both been ever presents during his reign, tested positive for Coronavirus on Monday.

It has been a tough week for the former Dundalk supremo who has had to deal without several first choice players due to injury and Covid-19 issues. Enda Stevens, Seamus Coleman, John Egan, Aaron Connolly, James McCarthy, Harry Arter, Alan Browne and Callum Robinson all missed Sunday’s 1-0 defeat to Wales.

The Bulgarians were beaten by Finland which leaves Ireland on 2 points and one point ahead of this week’s opponents. The losers will face relegation to League C of the Nations League. A draw will be enough for Ireland to avoid relegation.

Treaty’s Unbeaten Run Comes to an End Against UCD

The Limerick District League junior football season has been cancelled for the second consecutive year following a meeting ...
Read More →

Treaty United manager Tommy Barrett said that he was proud of his players attitude on Friday night during ...
Read More →

Treaty’s Unbeaten Run Comes to an End Against UCD

Treaty United succumbed to their first defeat of the season at the hands of UCD on Friday night ...
Read More →

Former Limerick FC centre back Paudie O'Connor has been named as Bradford City's Player of the Season. The ...
Read More →

Treaty United make their second trip to the capital in seven days to take on high-flyers UCD at ...
Read More →

Limerick District League on the Verge of Cancellation

The Limerick District League 2020/2021 Junior soccer season is on the brink of cancellation for the second consecutive ...
Read More → 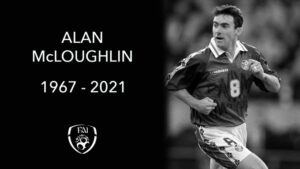 Former Republic of Ireland midfielder Alan McLoughlin has passed away at the young age of 54 following a ...
Read More →