Alex Wootton was the star of the show crossing for four tries as Munster dispatched newcomers the Toyota Cheetahs and capped what was a torrid Irish tour for the Bloemfontein side.

The Garryowen winger was simply unstoppable on the left wing as Munster supplied precise offloads and passes to put the 23-year old over in the corner twice in the first half.

Wootton added two more tries in the second half before being replaced by returning Ireland international Simon Zebo who quickly added his name to the scoresheet for Munster’s eight and final try of the afternoon. 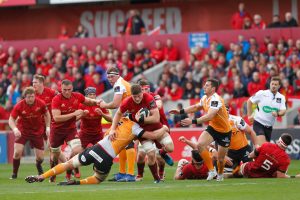 The South African side did cut the deficit to 22-11 almost directly from the second half restart with William Small-Smith crossing for an excellent try. It was a wake up call for Rassie Erasmus’ side and they duly responded with a clinical display of finishing and direct running with the centre partnership of Farrell and Taute constantly breaking the gain line and giving easy targets for the Munster pack to target.

Starting in place in Tyler Bleyendaal, Ian Keatley opened the scoring with three points after three minutes when the Cheetahs were caught offside.

The Munster scrum was dominant early on and huge pressure on the Cheetahs set piece on their own 5 metre line saw the ball pop out the back of the scrum where Jack O’Donoghue pounced on the loose ball before offloading to Tommy O’Donnell who finished from close range for the opening try.

Keatley added the extras and Munster turned the screw with significantly more possession and territory than their opponents. There was some respite for the Cheetahs as Robbie Peter slotted a penalty to cut the gap to seven points.

The Cheetahs’ revival was short lived as two minutes later Wootton scored his first try of the day thanks to a sublime skip pass from Darren Sweetnam who gave his teammate a clear run at the line. 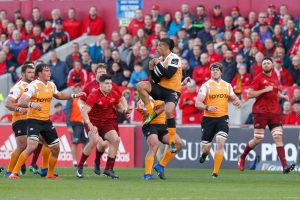 Wootton was in for his second of the afternoon before the half time whistle as slick handling across the Munster backline again created the space and the angle for the winger to claim another five-pointer.

Munster started the second half with a kick off down the throat of Springbok Francois Venter who found a gap in the Munster defence before offloading to William Small-Smith to cross for the Cheetahs first try.

Munster dusted themselves down after the Small-Smith try, dispelled any complaicency and responded with the bonus point score from a well constructed line out maul. South African Jean Kleyn with his 3rd in two games.

The try-fest didn’t let up as Chris Farrell crossed for the first of his Munster career followed yet again by Wootton who got his 3rd of the afternoon. Darren Sweetnam again showed by he will undoubtedly be on Ireland’s radar with another sublime pass to Wootton for his fourth and final try.

Munster’s maul struck in the 70th minute and after a consultation with the TMO, Simon Zebo was awarded a try. Henco Venter made sure the Cheetahs had something to take back to South Africa, scoring a consolation try in the 80th minute.

It caps a dismal Irish tour for the South Africans who have shipped two heavy defeats. They return home where hey will next weekend face Italian outfit Zebre and will be confident of getting their first win of the campaign.

For Munster, home games agains Benetton and Cheetahs were the perfect games to get the season up and running. Next week however, the intensity will have to increase by several levels as the face away games to Ospreys and Glasgow.