A sculpture of the late Anthony Foley has been unveiled in a riverside memorial on Clancy’s Strand in Limerick City. The 2m memorial is a stone depiction of Foley running with ball in hand.

The idea of a memorial was that of the Mayor of the City and County of Limerick Cllr Kieran O’Hanlon and was revealed at an event which was attended by the late player’s wife Olive, sons Tony and Dan, father and mother Brendan and sisters Rosie and Orla.

The memorial is located along the river close to the Curragower pub where thousands of Munster fans pass on their way from the city to Thomond Park. 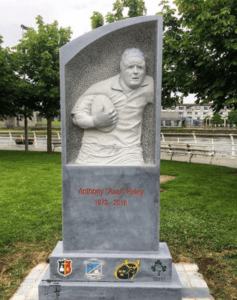