Having managed England to World Cup glory in 2003 against Australia, Clive Woodward was handed the daunting task of taking the Lions to take on the mighty All-Blacks two years later.

At the time, few would have been in disagreement with the decision as the Englishman was at the zenith of his coaching career.

Twelve years on from what was a disastrously one sided tour, the Lions once again face a huge task aiming to win a tour in New Zealand since 1971.

Further evidence of the challenge is that the Lions have only one series win in 11 tours to the land of the long white cloud and of a total of 38 tests, the visitors have only 6 victories to their name.

New Zealand have 29 wins with three draws between the sides.

Speaking to BBC Radio 5 Live this evening, Woodward looked back on the 2005 tour by claiming the Lions as a concept meant less to him than it does to the Irish, Welsh and Scottish rugby communities:

Playing for England was. Winning a World Cup was. Becoming the best team in the world, that was what it was all about.

The Lions was something I liked, I could understand why it’s important to British and Irish rugby. But I sometimes think the Celtic countries put too much stall on it. It’s almost the top of their tree, where I don’t think it is because it is such a strange thing when you look at it logically.

You play away from home, you give all the advantage away, you’ve got a scratch team.

Not exactly the enthusiasm you would hope to see in a Lions coach.

Woodward then made some bold claims about Paul O’Connell and Brian O’Driscoll during that 2005 tour before explaining how his plan to beat the All Blacks essentially revolved around incorporating both ‘superstars’ into his England team. 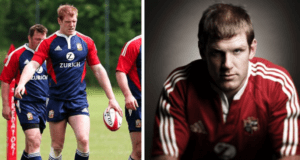 He also claimed that he had ‘let Paul O’Connell down’ on that tour, having – by his own admission – failed to build a good enough team to compliment O’Connell’s ability.

I always said, if you’re going to coach a Lions team, play Australia number one, then play South Africa, but don’t coach against New Zealand, because the history there isn’t good. So there was a lot of people close to me saying, ‘Don’t do it’.

Once I said I’d do it, I was going to do it. At the end of the day I was thinking, we have just won a World Cup, we’ve got an amazing English team. And I was looking at the other British teams and especially looking at [Brian] O’Driscoll and [Paul] O’Connell and thinking, ‘Crikey, we put a few of these players into the England team, I think we can beat New Zealand.’

I thought, if those players are absolutely on top of their game, we’ve got a real chance of beating New Zealand – especially O’Driscoll and O’Connell, I was really looking forward to working with them.

And it just didn’t materialise. I mean, Brian lasted 18 seconds. I felt I did let O’Connell down, because he was such a great player, a great bloke, and we just didn’t produce a team that allowed him to be at his best. He wasn’t at his best, but that wasn’t his fault – that was our fault.