The Crusaders have picked nine All Blacks in their matchday 23 to face the Lions in Christchurch on Saturday morning in what will be the toughest game of the tour so far for the tourists.

The Super Rugby leaders have named an All Blacks front row of Joe Moody, Owen Franks and Codie Taylor, with locks Sam Whitelock and Luke Romano in the engine room.

The impressive array of talent doesn’t stop there as the tight five spearheads a squad containing eight All Blacks in the starting side, with Wyatt Crockett named on the bench.

Israel Dagg, included in the 33-man New Zealand Test squad to face Samoa and the Lions announced on Thursday, will start at full-back. 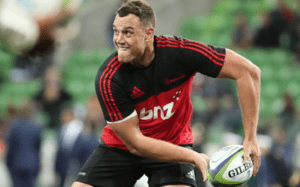 Israel Dagg wears the No 15 jersey for the unbeaten Crusaders

Adding to the Crusaders’ depth is eight-Test flanker Matt Todd, who is on standby as injury cover for the Lions series, and winger Seta Tamanivalu, who missed the international cut this year.

Scott Robertson said his unbeaten Crusaders side is relishing the chance to come up against Warren Gatland’s Lions.

“This is a huge and exciting challenge for us,” said Robertson.

“We are facing some of the best rugby players in the world, but we have some of the world’s best in this team too, so it will be a fantastic clash.

“No matter how it unfolds, this will be a game that the players involved will remember as one of the special moments in their careers.”

The only changes to the Crusaders team that beat the Highlanders last week to maintain their unbeaten record was at half-back – with Bryn Hall starting – a switch to inside centre for David Havili, Dagg at full-back, and Tim Bateman on the bench.

Having already lost the the lowest ranked New Zealand Super Rugby side in the Auckland Blues  earlier in the week, Gatland and co now face the best. Saturday could be a long day for the Lions if the performance level doesn’t improve significantly.