Erasmus makes one change to Starting XV for Cheetahs clash

Munster welcome the Cheetahs to Thomond Park tomorrow evening at 5:15 and Erasmus has made just one change to his starting 15 that beat Benneton Treviso last weekend. Tyler Bleyendaal is out of the squad completely with Ian Keatley coming in as his replacement. 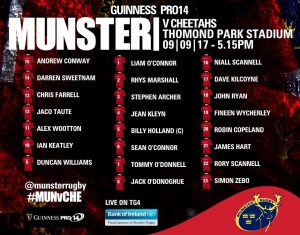 Billy Holland will take over the captains armband for the game. Staying in the pack, academy duo, Liam and Sean O’Connor will keep their places at loosehead and blindside flanker respectively, after impressive performances last Friday.

Erasmus has made a number of changes to his replacements with a total of five Irish Internationals returning. Niall Scannell, Dave Kilcoyne, John Ryan, Rory Scannell and Simon Zebo all come into the side as substitutes and are likely to make an appearance for the Province.

Here is the Munster side in full