At Munster’s University of Limerick base yesterday, Rassie Erasmus was non committal about the fitness of back row CJ Stander as the South African updated the waiting press on the health of some key players. “CJ is only going for scans today and we won’t know about him until later”.

There was however a more positive prognosis for the remainder of the walking wounded including O’Mahony, Murray and Earls.

“Peter O’Mahony has a dead leg, one of the nastier dead legs I have seen in a while but he has a good chance for this week,” he reported.

“It would be great to get Conor out there and we will give him until the last minute to see if can he get through this week. He must get some game-time with us.

“Keith Earls wasn’t too bad after Saturday, it was his back and a little bit of a groin but he is good to go. And Ian Keatley is not back yet but he is starting to train with us more this week and hopefully by next week he will be available.” 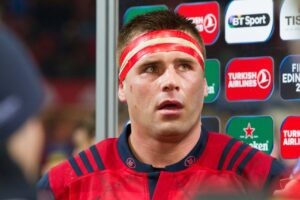 CJ Stander’s fitness is yet unclear

The mood in the Munster camp was buoyant following the Toulouse victory but focus must now turn to the crucial game against Glasgow at Musgrave Park on Saturday night next at 7.35pm, and the following Saturday, at 3pm against Ulster at Thomond Park.

“We are obviously very happy about the win although we know there were definitely a few minutes in the second half where the game could have got really tight”, said Erasmus.

“To win after they got that pressure on us showed that we are building resolve and hopefully we keep on doing that.

“No, there wasn’t any complacency. We have never this season become complacent. Saturday must have been the first game where we have been really favourites.

“Internally we know that we are still building and growing so I don’t think complacency was a problem. Underestimating the opposition will never be one of our problems this season anyway.”

These upcoming games can not only secure a vital home semi final but should galvanise an already battle hardened group ahead of the Saracens clash at the Aviva in a few weeks time.

There has been quite a bit of bad blood between Munster and Glasgow this year so expect another blood and thunder edition to the series, while Ulster is Ulster –  a derby game of that’s intensity needs no describing. 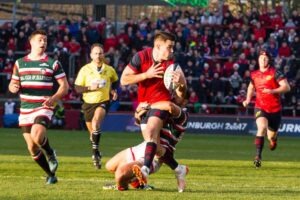 Conor Murray did not make the Toulouse game

Despite the looming challenge of Saracens, Erasmus says the team must remain focused.

“Dad used to say, if a dog chases two hares he wouldn’t catch one,” he said with a smile.

“Last week we weren’t sure if we would be planning for a European semi-final and the PRO12. Now we know we are in the semi-final and our mindset has changed a little bit. I am not saying at all that we diminish the importance of the PRO12.

“I am just referring to player management. If you focus on one and lose that one, you can miss out on the other one as well. We will have to try and go in both competitions as far as we can.

“It’s a little bit of a juggling act and we don’t have all the answers yet. We must see if we can get as fit and as on form a squad as possible when we get into the semi-finals after playing formidable teams like Glasgow and Ulster.

“As the week pans out, injury wise, it will be a little bit more player management wise now.”

It certainly is a juggling act with Erasmus and his backroom team needing to strike a balance between retaining the sharpness of the squad and keeping an element of freshness and recovery as a taxing 6 weeks beckons.

All in all, Erasmus problems are exactly the kind of problems any head coach would love, being competitive at the business end of the season and with interests in both domestic and European competitions.

Munster are in the midst of a three-game winning streak in the URC since the turn of the ...
Read More →

There were a pair of vital wins for Limerick sides at either end of the Division 1A AIL ...
Read More →

Graham Rowntree's side picked up a third successive URC win since the turn of the year to move ...
Read More →