In yet another departure from Limerick FC, Garbhan Coughlan has left the club by mutual consent with New Zealand set to be his next destination.

The Limerick native had been selected as part of the Irish team for the World University games in Taipei but didn’t travel wit the squad. The cup winner against Cobh Ramblers was his last goal for the Superblues and Neil McDonald’s striking options have been further reduced with his departure.

In a statement on their Facebook page, Limerick FC thanked Coughlan for his service and wished him the best in his new adventure. 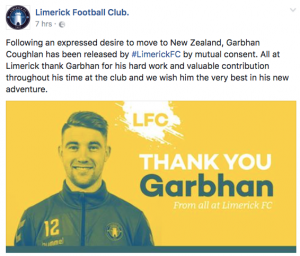