The introduction of two South African teams, The Southern Kings and The Cheetahs, would break the mould for World rugby, according to the launch of the Pro 14 on Friday in Cape Town.

The former Super Rugby franchises will join teams from Wales, Ireland, Scotland and Italy and begin the new competition in September which will be a first for global rugby. 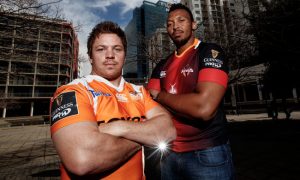 CEO of the Pro 14, Martin Anayi, was speaking at the launch of the new league and had this to say

It’s a momentous day for us to arrive in South Africa and get a sense of the excitement around the introduction of the Toyota Cheetahs and Southern Kings into the Guinness PRO14.

“The work we have achieved to expand our Championship is a great credit to SA Rugby, the Toyota Cheetahs and the Southern Kings. We have already seen the incredible interest from across Italy, Ireland, Scotland and Wales after our announcement about expansion and it’s great to see that replicated here in South Africa.

“This is a ground-breaking feat and a true first in world rugby as we will see north versus south compete on a regular basis in the Guinness PRO14. I would like to thank Jurie Roux and his team at SA Rugby for the hospitality they have shown us and wish our new teams the very best of luck in the coming season.

“Rugby supporters in South Africa and across our existing nations are in for a real treat this season and we can’t wait for the Championship to kick what will be an historic campaign.”

From a South African rugby point of view, Jurie Roux, who is SA Rugby CEO was very excited at the launch saying

This is a momentous day for rugby – as significant as the launch of the Super 12 tournament, 21 years ago.

“We are breaking new ground with a number of global firsts: this is the first cross-hemisphere domestic club competition; the first time we will have played summer rugby in South Africa and the first experiment in aligning a season in the south with that of the north.

“Our eyes are on the bigger picture, which is new horizons and new opportunities for South African rugby and our PRO14 partners. I’d like to thank Martin Anayi [PRO14 CEO] and the board of PRO14 Rugby as well as the national unions of Wales, Ireland, Scotland and Italy for opening the door at short notice and welcoming us through it.

“We look forward to this adventure and building something special.”

What ever you make of the revamped format, it certainly adds a little extra spice to the competition. Let’s hope the addition of these two sides will add to the appeal of the league.