What a difference a week makes, well defensively at least. The midweek wrongs of Whangarei were corrected as the Lions played smart rugby to topple the undefeated Canterbury Crusaders.

Right from the off the Lions were sharper, smarter and most important of all more disciplined. The penalty count was much reduced from last week which ensured the Crusaders would have to work for every inch.

With eight All Blacks in the Crusaders ranks, this should be awknoldeged as a positive progression. There was so much to admire in what was an absorbing, unremitting contest if not always the most free flowing.

This was very much a turning point in the tour for a team that had been roundly criticised – and rightly so – for an abject performance against the Blues lat time out and an equally flat opener against the Provincial Barbarians. 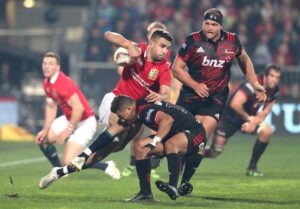 Conor Murray controlled the game from 9

The Lions needed to respond and the did so in spades. Even though Warren Gatland has stated that he does not know his best XV, this line-up carried with it the air of a shadow Test side. That bodes of the Munster trio of Murray, O’Mahony and Stander who all played roles today.

Ben Te’o did enough in the first half alone, with his step and his power and awareness to suggest that he should be the Test no. 12. Conor Murray and Owen Farrell were hard-nosed and involved, directing and challenging. There were eye-catching cameos, too, from Taulupe Faletau and Sean O’Brien.

Players were making statements, ensuring that not just coaches would take notice but the entire country of New Zealand. There had been a creeping sense of anti-climax in the air, as if the Lions were not all they were cracked up to be. No longer. 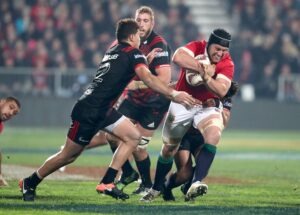 The Lions knew that they would have to deliver their best. They may be a scratch side up against New Zealand’s finest in the Crusaders with their unblemished 14-0 record this season but with a fortnight to go to the first Test, every minute, every tackle, every ruck, scrum and lineout mattered.

The Lions began at a fair old lick. The difference in tone and tempo from their limp effort seven days ago was marked. They were almost over the tryline within 30 seconds only for Jonathan Davies’ pass to George North to be intercepted.

There was to be no let-up in the Lions’ bold attitude. They were sharp and inventive in attack, fierce and resilient in defence. They due reward for their pressure, too, with Owen Farrell banging over two penalty goals in the opening 15 minutes.

It was a thoroughly deserved advantage. The scrum had the Crusaders in real trouble, conceding four penalties and free kicks in the first quarter. The possible champions-elect of Super Rugby were well and truly rattled.

It was frantic rugby, quite in keeping with the occasion at what is considered the Kiwi equivalent of Thomond Park. A throaty crowd roared its approval at the action, stirred too by a mass dust-up that followed a scrum.

For once the Crusaders got the nudge and pile-drove their opponents backwards. Fists flew on the floor but French referee, Mathieu Raynal, well-used to such skirmishes in his homeland,  handled it well.

George Kruis’ influence on the lineout began to bear fruit and there were some powerful carries from Mako Vunipola and Alun Wyn Jones. Hooker Jamie George had a solid evening as did Tadhg Furlong alongside. Given that there were six All Blacks in the Crusaders pack it was a very decent shift from the red-shirted forwards.

It was a cracking contest, end-to-end, play-to-play, occasional errors only adding to the frantic feel. Both sides had their chances. Ben Te’o danced his way through at one point, Sean O’Brien made a powerful run.

Crusaders had their moments, plenty of them, notably when tyro fly-half, Richie Mounga, latched on to a fumbled ball and sped upfield linking with Jack Goodhue. The Lions had to scramble and they managed it, as they did all through the first half.

Their line speed had the Crusaders under the cosh, forcing  them to make mistakes that no other side had managed to induce this season. The home side went down the tunnel 9-3 adrift, their lowest return at the interval in 51 games.

The Lions even managed to overcome the disruption caused by losing two players from the back line. Stuart Hogg copped a blow to the head from his own player, Conor Murray, and was replaced by Anthony Watson while Jonathan Davies was hauled off for a Head Injury Assessment, Johnny Sexton coming on in his place.

The Lions began the second half as they had left the first – with attitude. Once again that relentless commitment caused errors. They had given away a penalty within four minutes and even though head-on to the posts from 35 metres, Farrell sent it wide. It was a rare blob on the night.

The Lions needed comfort on the scoreboard for the Crusaders have shown time and again this season that they can never be written off in a match. They have come from behind so often. And centre, Jack Goodhue, on the fringes of the All Blacks, proved just what a threat they can be with a wonderful break from deep, his kick-through grubber as he was felled a perfect ball for his wing to chase but George Bridge could not gather. Close, very close.

Back came the Lions, though. Anything the Crusaders could do. Liam Williams broke down the left wing, chipped ahead and only an eagle-eyed TMO spotted that he had knocked on in trying to re-gather, Anthony Watson having come steaming through in support.

It was lung-scorching stuff. Shortly afterwards, it was the turn of Watson himself to set the pulses racing, eating up the yards, passing to Sexton who found CJ Stander in support but the Irishman could not hold the pass. It was a gilt-edged chance spurned.

Who would crack first? Back came the Lions, Farrell, Sexton, Te’o and Williams combining down the left flank in the 69th minute.  On and on pushed the Lions. Faletau went close, so too Alun Wyn Jones. The Crusaders infringed and Farrell kicked the goal to put the Lions clear at 12-3 with ten minutes remaining.

Unlike last time out, the Lions were able to close out the game from a winning position keeping the Crusaders at arms length for the remaining minutes to secure the win.

“This team [the Crusaders] had averaged five tries a game, so I thought our defence was outstanding.

“It’s a tryless game – we’ve kept them tryless but we’ve created a few chances. I would have liked to see Anthony Watson have a go at Israel Dagg one-on-one.

“They had eight All Blacks. We had eight guys who played that final Test in 2013.

“I thought the bench – Maro Itoje, CJ Stander and the front row – were excellent.”