Ireland face a Wales team in trouble at the Principality Stadium tonight in what promises to be another bruising encounter.

If Ireland are to maintain their push for a possible championship, then nothing less than a victory will do set up a St Patrick’s weekend decider against the Eddie Jones and his English squad.

With the roof set to be closed, therefore ensuring dry ball playing conditions, Ireland cannot afford a slow start. Starts against Scotland and France were not of the desired intent and Joe Schmidt’s charges were slow to start.

Both coaches have named the same teams that started in each teams previous round. For Ireland Rob Kearney is named at full-back where his selection was pending on a bicep injury he picked up while playing Scotland in Ireland’s first game.

If Ireland are to emerge successful, then they are going to have to get off to a good start. Something they did last year but surrendered a 13-point lead in a 16-16 draw at the Aviva Stadium. Full highlights of that match are below.

Garry Ringrose is retained at -centre where there were calls for Ulster’s Jared Payne to be reintroduced. However, Schmidt has decided it is too early for Payne after recently returning from injury and he is not included in the match day squad to some dismay.

After being slight concerns prior to the French game, Conor Murray and Johnathan Sexton are coming into this game at full health which is a major worry for the Welsh as they are arguably the stand out half back pair in World Rugby.

Biggar and Webb might have other ideas but both half back pairings have the potential to win a game. If Ireland can get their two into a rhythm while disrupting Wales at the breakdown then the Schmidt’s charges have a reasonable chance.

Tommy Bowe of Ulster was also named in the squad as back up for the back three positions. This call has come under scrutiny as the in-form Munster utility player Andrew Conway is left out. In other team news Josh Van Der Flier will miss the rest if the championship after suffering a shoulder injury.

This could mean more game time for Munster’s Peter O’Mahony who has recently returned to fitness and is at the top of his game for his province. He will be hoping to prove himself for his country as well. Fellow Munster men Niall Scannell and John Ryan are also named among the replacements.

Welsh coach Rob Howley has come in for some criticism over not making any changes to the team that were beaten by Scotland last time out. Many Welsh fans have called for replacements to given their chance such as veteran Jamie Roberts after the Scottish upset. 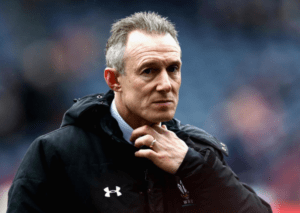 However, Howley has ignored these advances and has given the same XV the chance to make amends against the Irish who are desperate for a win to set up a final day title decider against the English.

The Wales starting XV will have to repay the faith shown by their stand in coach or the axe will surely fall on some of them for their final game against France.
Heading into Friday’s vital Six Nations clash against Wales, Ireland sit in second place with 10 points, 3 points behind leaders England.

The introduction of the bonus point has allowed Ireland to remain within touching distance of the English as Ireland would be 4 points in arrears at this stage if it were not for the bonus points.

England received a bonus point last time out against the Italians after a second half blitz of tries.

As ever the influence of the match officials could have a crucial bearing on the outcome and 39-year-old Englishman Wayne Barnes will be the man in the middle for tonight’s game.

The barrister-cum-referee has overseen Ireland matches for the last decade and of all the whistlers who have officiated at least five Irish games in that period, the losing record under his watch is significantly higher than any other. 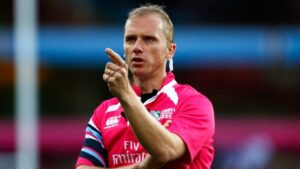 Wayne Barnes has not been a good omen for Irish teams

Ireland have won only four games in the 13 he has taken charge of, with a 69\% losing record significantly higher than any other referee. The only official with a higher percentage is Jaco Peyper (75\%), though the South African has only taken charge of four games, most notably the November defeat to New Zealand and last year’s controversial loss in Paris.

Schmidt, his coaches and most importantly his players must have a clear understanding at what Barnes wants at scrum and ruck time. More importantly, don’t give him a decision to make. Discipline is critical.

Ireland know that a win is a must against Wales this Friday. However, Cardiff has always been a bogey ground for the men in green and they must be aware of a Welsh onslaught after their loss to Scotland. Yet expect Ireland to come up with a big-time win this weekend.