Ireland look to stop the English juggernaught in the Aviva.

Ireland look to stop the English juggernaut in the Aviva

Ireland entertain England this Saturday in the Aviva in a game that was pencilled in prior to the Six Nations as a potential Grand Slam decider. For one team on Saturday there is a Grand Slam up for grabs, however, that team is the English. Eddie Jones’ men have stormed through the Six Nations for the second successive year and are closing in on back to back Grand Slams.

For the Irish team, pride is the only thing on offer. After such a successful November series with a first win over the All-Blacks in 108 years and a win over Australia in Dublin much was expected from this Irish squad heading into the Spring.

However, with two losses from the opening four games, things have not gone to plan for the Irish men. Both the Welsh and the Scottish highlighted Ireland’s weakness defending wide on the wings and ran in three tries each. Stuart Hogg and George North both claiming braces against the Irish men.

Wins over poor Italian and French team papered over these defensive cracks and Ireland were expected to prove too much against the Welsh team humiliated against the Scottish in round 3. However, what followed in the Principality stadium last Friday evening was a disastrous display from the men in green as they failed to perform again.

Excluding the Italian game, the Irish have looked toothless in attack thus far. Rarely have they created any meaningful space on the wings for Simon Zebo or Keith Earls to attack into. Rob Kearney at full back has seemed more eager to run into men than trying to find any gaps. Whilst Ringrose has looked promising at outside centre, Robbie Henshaw has yet to use his quick feet in midfield but instead is used as a battering ram.

Johnny Sexton returned in game 3 against the French and was magnificent. However, his over use of the loop was exploited against the Welsh as it was far too predictable and Wales were able to stop it at the source by stepping up on Sexton’s overlap.

This is akin with the whole Irish attack as it is generally too predictable. Most attacks consist of one- phase plays where our forwards try to run over defences instead of forcing the ball wide. Against the English, who are a physically imposing side, this won’t work. The English are arguably the best defenders in the tournament with huge strength at their disposal.

This is to not say Ireland are capable of scoring tries. This is the same team that put 40 points on the board against New Zealand. Scoring 5 tries against the All-Blacks is no mean feat and not many teams achieve it. Yet the same team has not been able to recreate the same moves and plays this spring so far. 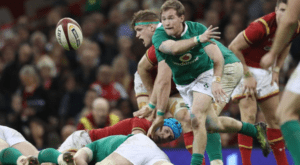 Due to injuries there are significant changes to the Irish team to play England. There is good and bad news for the Munster contingent. Conor Murray, contrary to belief, will not be fit to play after picking up an arm injury against Wales so Kieran Marmion will deputise again. Its hard to imagine Murray’s loss not having an impact, such is his quality, although Marmion gave a good account of himself in his Welsh cameo.

Peter O’Mahony who was expected to come into the starting XV is named as one of the replacements, as his Niall Scannel who some felt should come into replace Rory Best. However, Andrew Conway is in line to make his Irish debut as the in-form Munster man is named in the matchday 23. It is something richly deserved after a string of impressive performances for Munster.

In the other changes, Jared Payne comes in at full-back for the injured Rob Kearney. Leinster’s Devin Toner is relegated to the bench for Iain Henderson who comes in to parter Munster’s Donnacha Ryan in the second row. Luke McGrath has been called up as replacement scrum-half.

The sight of the English in the Aviva will no doubt spur this Irish team on this St Patricks Weekend. In 2011 the English rolled into the Dublin with the prospect of a final day Grand Slam on offer. So confident they were, they had brought along custom made grand slam t-shirts. The Irish who had not played to their potential that tournament stifled their opponents and ran out convincing winners that day. Whilst the English squad at the time is not as impressive as the 2017 version, here’s hoping for a similar Irish performance.