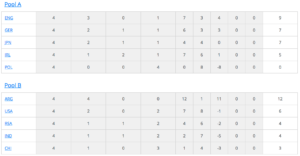 England were on top early on and built a 2-0 first half lead. The first goal came via a Sarah Haycroft’s attempted cross that Zoe Wilson had the misfortune of turning into her own net. That was followed up by a Shona McCallin goal which was tipped in from a penalty corner set piece.

Ireland responded with two quick fire goals immediately after the interval. Nicci Daly and Katie Mullan both found the net with backhand efforts to level the scores at 2-2.

Ireland continued to push forward but the game was ultimately decided in the 43rd minute with England’s Alex Danson firing home a rebound from another penalty corner.

Limerick’s Roising Upton made an appearance off the bench but Ireland were unable to effect an comeback. While the defeat was disappointing, Ireland were competitive in all aspects of the game and would not have been flattered had they earned a draw.

Speaking to media after the game, Irish coach Graham Shaw said he was

“very disappointed but proud at the same time.

“Our performance was absolutely superb from the very first minute to put a side like England on the back foot for long periods, we should be very proud of ourselves.”

Ireland will now take on Argentina on Tuesday July 18th